Hartline eager to prove he belongs 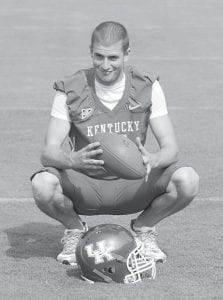 Mike Hartline envisioned the day when Kentucky coach Rich Brooks walked over to him, put a hand on his shoulder pads and told Hartline he’d won the starting quarterback job.

Hartline just didn’t envision the talk would come before the first snap of fall practice.

Yet when Brooks dismissed junior quarterback Curtis Pulley last week for violating team rules, it ended any training camp duel between Hartline and Pulley before it began, making the redshirt sophomore the de facto starter in the process.

Now, Hartline’s goal is to prove it’s a job he would have won anyway.

The truth is Hartline may have already beaten Pulley before Pulley’s legal troubles sent him packing.

Though the two played to a draw during spring practice, Hartline’s work off the field over the last four months gave him the edge in the locker room. Offensive coordinator Joker Phillips surprised some — including Hartline — when he said over the summer that Hartline appeared to be gaining the advantage because of his leadership efforts.

“As far as showing those other qualities that a quarterback needs besides athletic ability out on the field, that’s what I was working on,” Hartline said. “Things like trust, being on time, reliability, working with people, not afraid to put in extra time. That’s what those guys are looking for.”

It’s the same kind of qualities that made former UK star Andre Woodson one of the top quarterbacks in school history. Hartline spent two years watching Woodson lead the Wildcats to consecutive 8-5 seasons and wins in the Music City Bowl. While he admires Woodson’s poise — not to mention his arm strength — Hartline shies away from any comparisons between the two.

Maybe, but a little bit of Woodson would go a long way toward making sure the Wildcats don’t slip back into the Southeastern Conference’s second-tier. Phillips thinks Woodson’s tutelage has helped Hartline prepare, and unlike the shaky situation Woodson inherited at quarterback four years ago, Hartline should have plenty of help when the Wildcats open the season Aug. 31 at Louisville.

Hartline’s mission will be making sure he knows how to use them. Though he played well during the spring game, throwing for 124 yards and running for another 38 and a touchdown, he misfired on a couple of deep passes, a staple of the Wildcats’ offense the last few years.

Brooks isn’t worried, maybe because he doesn’t have a choice. Backup Will Fidler is coming off a shoulder injury, and will be disciplined internally after being arrested for disorderly conduct last month. Pulley’s dismissal makes freshman Randall Cobb the likely third-stringer. That makes Hartline — who has six career pass attempts — the guy, for now anyway.

“He’s a tough guy, he’s mobile,” Brooks said. “He makes, for the most part, pretty good decisions and that hopefully will continue to improve with more reps.”

After watching Hartline lead drill after drill during the offseason, of showing up early and staying late during weight training sessions, his playmakers are more than willing to be patient.

“It’s our job to make sure that everybody knows he’s the leader of this offense,” Lyons said. “I’m going to follow him and the rest of the guys are going to have to know that he’s the guy that is going to take us where we need to be.”