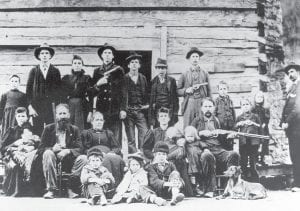 The Hatfield clan posed for this photo in April 1897 at a logging camp in southern West Virginia. (AP photo)

As television viewers around the country continued watching the History Channel miniseries the “Hatfields and McCoys” this week, this volatile time in Kentucky and West Virginia’s history will likely draw new interest into the families’ lives and battles.

Fortunately, newspaper coverage of this storied feud and other major moments in the state’s history can easily be accessed and researched digitally worldwide through the National Digital Newspaper Program and work being done at University of Kentucky libraries.

Beginning in 2005, UK Libraries was one of a select group of six libraries across the U.S. chosen to receive funding from the National Endowment for the Humanities to digitize historic state newspapers. Staff at UK Libraries made the papers available through research into conservation practices and development of their own digitization method to transfer the newspapers from microfilm. The content from this digitization work was then deposited into the Library of Congress’ “Chronicling America” and into the “Kentucky Digital Library” where the public can access it online.

Among this rich digitized collection are several articles on the Hatfield and McCoy feud from newspapers around Kentucky. From brief mentions of possible state government responses and court battles to a longer report on the imprisonment of members of both families, newspapers made the feud front page news around the world.

A look at the Feb. 20, 1888 edition of The Evening Bulletin gives readers interesting insight into the characters on both sides of the conflict, including descriptions of key family members incarcerated in Louisville awaiting trial. The Maysville newspaper goes on to say, “These men have the reputation of being desperadoes, but their appearance would hardly indicate that any of them were cut throats, ambush assassins and murderers. Valentine Hatfield appears to be the leader of the gang, and while having more intelligence than the others, seems to be an inoffensive and quiet old justice of the peace. He claims to know nothing of the many heinous crimes with which he is charged, and professes to be a much injured individual. He dresses fairly well for a mountaineer, speaks slowly and uses good language.”

As for the patriarch of the McCoy family, The Evening Bulletin describes Randolph McCoy as “about sixty-five years old, bent with cares and sorrows, and withal a most miserable looking creature. His face is one mass of heavy wrinkles, and his eyes are dull and dim.”

Not surprisingly, neither Valentine Hatfield nor Randolph McCoy believed themselves guilty of the crimes charged against them.

Looking back three weeks earlier, readers can see evidence that the feud between the two families had state leaders in both Kentucky and West Virginia on high alert. Coverage in The Hazel Green Herald on Feb. 3, 1888, includes more than one reference to the governors of both states considering sending in armed forces to control the conflict.

Seven years after being chosen for the National Digital Newspaper Program, UK Libraries has received its fourth grant for the national project and continues to digitize more of Kentucky’s historic papers.

To date, the Kentucky Edition of the National Digital Newspaper Program has contributed 307,612 pages from 59 Kentucky titles to the Library of Congress’ Chronicling America.

Whitney Hale works with the University of Kentucky Libraries.