Hats off to Homemakers 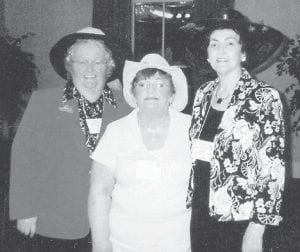 The first documented information about the Homemakers organization in Letcher County was written in 1942 by Mary Belle Rogers, the first Home Demonstration agent in the county. Three clubs were organized that year – Whitesburg, Jenkins, and Colson. Soon six clubs had bee organized. Over the years, there have been Homemaker Clubs is almost every community in Letcher County. At the present time, there are six active clubs – Letcher Area, Linefork, and Town & Country. There are also 26 members-at-large.

Vernell Mullins and Lois Shortt recently attended the State Homemakers Meeting in Louisville along with Ann Bradley, agent for Family and Consumer Sciences. That meeting included business sessions, learning workshops, cultural art exhibits, trade show, awards programs, and a full schedule of activities. Letcher County Homemakers received several awards for their participation in the Ovarian Cancer Screening Program at the University of Kentucky. They won second place in the 2008 Ovarian Cancer Fundraising Contest, which included all the different projects they sponsor during the year. This year, they raised a total of $3,701.48. This led to second-place honors with the largest donation per club member, a certificate for contributing over $1,000 and a certificate for 100 percent participation (for giving at least $1 per member) for their support of the screening program. There are now 199 local women being screened for ovarian cancer through the free program each year. To learn more about it, you may call Ann Bradley at 633- 2362.

The 2008 County Homemakers Meeting was held May 21 at the Letcher County Extension Office. There were 54 members and guests in attendance. A delicious potluck lunch was served, the cultural arts were on exhibit, club reports given, and a fun fund-raising project was held for the college scholarship. Virginia Brown was honored for having been a 60-year-plus Homemakers Club member and for serving as County Homemakers President in 1954-55. She has a very historic Homemakers scrapbook from 1951-52, covering countywide Extension Homemakers Club activities that year. The book is part of the 66th Anniversary Celebration exhibit at the County Extension Office in Whitesburg. You are invited to come by the Extension Office to see it and learn more about Homemakers and other Extension programs.