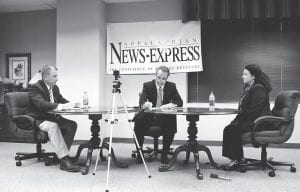 The two candidates seeking to replace 94th District State Rep. Leslie Combs in Frankfort met at the office of the Appalachian News-Express newspaper in Pikeville Tuesday evening to discuss the issues important to the region.

And, despite the two candidates being from opposing parties, they agreed on many topics, especially the need for jobs to be brought to the region.

Democrat Angie Hatton, a political newcomer, and Republican Frank Justice II, former Pikeville mayor and current city commissioner in that town, both spoke on their plans and the need for cooperation throughout the district for the future of the region.

However, Hatton, commenting on negative campaign advertising, said she does not support Democrat Hillary Clinton and will vote for Republican Donald Trump, though she disagrees with him on many issues aside from coal.

Hatton said that, as this is her first political race, she was not prepared for the onslaught of negative advertising.

“I have had the most horrible things said about me,” she said, adding that one of those advertisements which have targeted her accuses her of being in favor of abortion and “selling baby parts,” something she said is not accurate. “There is absolutely no truth to that assertion.”

Further, she said, she has never taken money from the national party and supports the Second Amendment, even showing her concealed carry permits at the forum.

Justice, however, said the differ- ence between the two candidates comes down to the difference in their political stances, pointing to the paperwork that both signed when they filed to run in their respective parties.

“It does not say anywhere in there that I will uphold every single piece of the Democratic national platform,” she said. “It has never been interpreted that way. ” e

Justice pointed to 14 years of lobbying experience on projects such as Thompson Road and the Marion Branch industrial park in Pike County as part of what qualifies him and makes him able to go in as a freshman legislator.

Hatton said she has experience in being objective and finding compromise.

“I’m a trained mediator,” she said. “I’ve always been good at bringing people together.”

Hatton said she has also covered politics as a journalist and worked on legislative matters.

Jobs are the key

Both candidates agreed that bringing jobs to the region is one of the most important goals for the future.

“Jobs have been hurting ever since the downturn in the coal industry,” Justice said. “We’re going to have to diversify this economy.”

Justice said that in order to overcome the area’s challenges, such as its lack of interstate highways, tax incentives should be offered to help encourage industries to come to the mountains.

Also, he said, work must be done to “alleviate EPA regulations, get the foot off our chest and get our coal miners back to work.”

Hatton said the region must take advantage of what it has.

“We need to use what we have,” she said.

Hatton said the area has opportunity in using its strengths, such as natural beauty to draw tourism, forests to feed woodworking industries. However, she also said the region can potentially feed off industry already available in Kentucky, such as the auto industry in Bowling Green and Georgetown to build the parts those companies need to build vehicles.

Justice also stressed the need for cooperation between the different political parties and levels of government that are working to improve the region.

Hatton said it is also important that the legislators listen to the people and work at a local level to improve.

She also said she would have no problem in allocating funding to the City of Pikeville, which has seen much of the region’s growth, but that she wants to ensure that money is spread throughout the area for progress.

“I don’t have the slightest problem with the City of Pikeville,” Hatton said, adding she has numerous connections to the community. “I just want to make sure the rest of them get their fair share. Over in Letcher and in rural parts of Pike, they feel forgotten and left out.”

Hatton also took aim at the City of Pikeville’s numerous annexations while Justice has been in leadership there, saying that the newly-annexed residents have expressed to her that they feel they are being taxed for services they’ve not received.

“That’s my district too,” she said. “I just want to make sure it’s spread around.”

Hatton agreed that tax incentives can work, but added more is needed, especially in the realm of cooperation.

“The way we attract them is tax incentives, as well as economic development plans that are cohesive and that are not fought by different factions … when you have more than one county working together,” she said.

Both candidates have connections to the coal industry and believe the industry can rebound, but disagreed on how that could happen.

Justice said he believes Trump could be key to getting the industry restarted.

“We’ve got a government that’s kind of putting its foot on our chest and holding us down,” Justice said. “I think we have a candidate in Donald Trump that will get the EPA off our backs and let our guys have a level playing field.”

“I think coal can come back,” she said. “It’s not going to take a president to do it.”

Hatton said it will take a concerted effort to bring back coal amongst all leadership, particularly with the area’s representation in Washington, D.C.

“What’s going to change things is if our congressmen go to war for us,” she said.

The candidates sparred somewhat when discussing a question about whether they would support a tax on products such as bourbon or horses, much like coal severance, which is distributed throughout the state.

Justice said a bourbon or horse tax is like apples and oranges when comparing them with coal severance, because coal severance is a tax on non-renewable resources. The other products, he said, are made every day.

However, Hatton took a shot at Justice in response, saying she’s “not surprised” Justice would be opposed to a horse tax, because he owns a horse farm.

“I think it’s a great idea,” she said. “If we’re going to tax eastern Kentucky for what we do … and how we make a living, why shouldn’t we make them?”

Justice defended the decision of Gov. Matt Bevin in the last legislative session to veto a bill that would have returned 100 percent of coal severance funding back to coal-producing counties.

“It’s my understanding that the governor vetoed that bill because of the fluff that was in there,” he said. “I’m for the coal severance coming back to our region. I’d like to see the bill where it just spells that out.”

Both candidates said they support the efforts to build a proposed federal prison in Letcher County.

Justice said he has heard the objections, with people saying they would rather see a “Toyota” coming here. The area, Justice said, is not ready to support a Toyota.

“Where are we ready for Toyota to come to at this very minute?” he said. “I’m for whatever brings jobs right now to eastern Kentucky.”

Hatton said she was involved in the initial planning stages for the prison and that she is aware there are numerous negative issues that often accompany prisons in communities. But, she said, the facility can be an asset.

Both pledged to work to bring infrastructure for the project.

Hatton, a prosecutor, said she sees often the effects of drug abuse in the court system and in families.

“It’s all a direct result of rampant substance abuse,” she said of crime.

A key to stopping the rising crime rate, she said, is getting good rehabilitation and counseling facilities locally.

Justice agreed, adding that if people are released from jail and just go back into the same patterns, they’ll reoffend.

However, he added that economic development will help.

“We need to give them hope … hope through jobs that they can better themselves,” he said.

They disagreed, however, on the role of legislation in the drug abuse problem.

“I don’t think there’s any legislation that is going to help,” Justice said. “This is with by treatment and incarceration, unfortunately.”

However, Hatton said, legislation can be filed both to help fund treatment and also punish people who are “profiting” from the scourge of drug addiction, including some healthcare professionals.

Hatton said something must be done to allow better communication between the healthcare and law enforcement community to ensure that people who are abusing drugs and committing crimes can be cut off from their supply.

The candidates also sparred over education, with Hatton blasting the Republican administration for “cutting funding.”

“Any cut in education funding will be fought if I’m your legislator, at every turn,” she said. “If we want our kids to have a bright future, we have to give (them) … the tools to make that happen.”

Charter schools, which have been proposed by Republican lawmakers, will “never be the answer,” she said.

Justice said funding for kindergarten through high school has been increased, but that the educational cuts instituted were focused on higher education.

At that level, he said, there have often been too many perks and wasteful spending.

“We need to make sure that money goes to educating students,” he said.

Russ Cassady is the editor of the Appalachian News-Express in Pikeville. For complete coverage of Tuesday’s forum, visit www.news-expressky.com.