Hauling a load of coal

A Conversation with Kenneth Blair 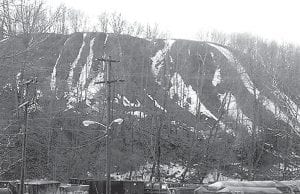 Slate dumps like this one seen in Pennsylvania were once visible throughout Letcher County and other coal mining counties in southeastern Kentucky. (Photo courtesy www.coalcampusa.com)

During the early 1900’s, the lower section of the road up Caudill’s Branch (Carbon Glow) was in the streambed for a short distance. The railroad extension from Blackey to the coal tipple on Caudill’s Branch crossed the stream and road with a short concrete bridge that allowed for the traffic of that day to pass under it.

With all the human activity upstream from this bridge, it often became clogged with debris during heavy rain and had to be cleared before it could be reopened for traffi c. Several years later, the railroad company moved a section of the stream closer to the eastern side of the hollow and built up the road to cross the railroad where it is today.

Jeane Francis Coal Company mined the No. 4 coal seam in Caudill’s Branch. Near the bottom of this seam of coal was a layer of slate about six to eight inches thick. Beneath the slate was another layer of coal, but this bottom layer was of poor quality and was called “bone coal.” It burned slowly, released little heat, and left a large pile of ashes. However, it was necessary for the coal company to mine all three layers.

Since there was no market for this bottom layer of bone coal, the coal company hired people to pick it, along with the slate, out of the No. 4 coal as it passed by on a conveyor belt. The culls were thrown over the hill into a pile. The coal company allowed local residents to have the bone coal. Many residents considered the bone coal to be worth the free-for-the-hauling price.

While young, Kenneth Blair rode with his father, Monroe S. Blair, on a horse-drawn wagon to get a load of this bone coal. Monroe was hauling the coal to the home of his father, Samuel D. Blair, for his father’s winter supply. Kenneth said the trip under the railroad bridge seemed like a tight fit since he was not used to riding through tunnels. On the return trip, the team of horses had to strain to pull the loaded wagon out of the stream/road and up the bank onto the main highway toward Sam Blair’s farm a mile or two upstream.

Such piles of slate and bone coal as mentioned above were called slate dumps. These slate dumps often became quite deep and the natural decaying of the slate and bone coal released small amounts of heat. However, the depth of the dump prevented the quick escape of the heat, and the trapped heat often accumulated until the slate dump started smoking and sometimes caught on fire. The smoke from the slate dumps made life miserable for those living close by. Today, the smoke would be declared a health hazard.