Hayward Day is home from hospital 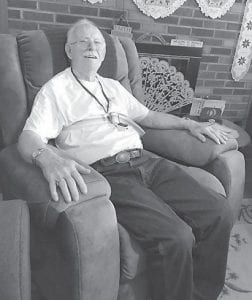 Hello again everyone! There’s a feel of fall in the air early of the morning, as I have taken a few minutes to sit on the back deck to enjoy the new beginnings of another day. I love to see the fog early as it settles across the open space around me.

This seems to have been a long week for me for some reason. It has been beautiful weather although the Ohio Valley area could sure use a good rain. Then I think of all the destruction from too much rain in Texas.

How about the snowstorm in September in Montana? The local news reported they had four feet of the white stuff. Well, I would sure have to stay home as all you would see is a little more than the top of my head.

Montana can keep it or anyone else that wants it, as I am perfectly satisfied with the weather as it is right now.

This has been a difficult week for me as my right broken ankle has really been acting up. I went back to the orthopedic doctor who informed me the same news that I heard from my physical therapist — it will take a year or longer to heal. The doctor prescribed steroids for the swelling and to ease the pain.

Of course that comes with side effects that can cause more swelling, jittery, and anxious feeling, plus not being able to sleep. Now my foot is already swollen, and if I want to feel jittery I would drink coffee and I can’t sleep the way it is, so why do I want to take steroids?

Again I hope the woman who has caused me the pain and agony has a little bit of pain, as she has taken away so much from me since June 1.

Again the thought comes to me that so many are going through so much worse than me.

My sympathy goes out again to the family of Phyllis Caudill of Kingscreek, and the family of Steve Stamper. I wonder how much more can this family endure? Steve Stamper is Phyllis Caudill’s brother. Steve lost his wife about eight months ago. He never got over Pat, and then two weeks ago, Steve took his final voyage. Their daughter, Susan Stamper Tyree, took her final voyage this week at the age of 52. Susan leaves a son Josh, who loved his mother and grandparents. Lorie has lost both parents and now her only sister. Oh yes my heart goes out to this family.

My sympathy goes to Annette Akers of Kingscreek, who lost a brother a couple of months ago, and she has lost another brother this past week also.

Some time ago a remark was made that people from the mountains are cliques, well I don’t know about that, but I can say one thing, when I hear of someone losing a family member it hurts me to the core of my being. For the simple fact I know what losing someone feels like.

I’ve wanted to mention something in my column for several months, to be honest I was afraid to say very much.

Hayward Day had some really serious health issues. Hayward spent 153 days in the hospital at Fairfield Mercy Hospital and Shawnee Springs Nursing Home & Rehab. I was able to go visit Hayward a few times before my accident June 1, then I wasn’t able to go for quite a while. Vicki Power pushed me in a wheelchair so I could go visit Hayward.

I finally have been able to go see him on my own, except my ankle has been given me a fit at times and I don’t get out as much as I want to. I went to see Hayward on Saturday morning only to find out he was released 10 minutes before I got there. There were so many times that I wanted to tell about Hayward in my column, and give the address so he could receive cards.

I was afraid to put it in my column as you never know when you post that someone is gone, so I choose never to give that information out.

Hayward is Ann Calihan’s brother-in-law, as I might have mentioned before. I met Hayward and his wife Vivian and their beautiful daughter Kim several years ago, and yes I love the family like they are my own blood. I am so pleased that Hayward is home.

A few days ago I received some very shocking news. A deer was killed and it was lying in the hayfield across from me. My son Keith Ballard knew in a day or so the smell would be unbearable as it was close to our house.

Keith drove over to the house across the road, as he asked what he could do about having it moved. He was informed that the owner of the hayfield, Gene Ziegler, had passed away a week ago.

I’ve known Gene and Carol Ziegler over 50 years. Gene was Keith’s baseball coach when he played in Little League. They have lived directly across the hayfield from me since the tornado hit Harrison.

I have been in their house two times, and Carol has been here about the same. We would talk on the phone or wave at each other. For the past four years with health issues I haven’t been outside very much, so I had no idea that Gene Ziegler passed away. I don’t get a local paper, and I don’t have any neighbors close to me.

This afternoon I plan to go visit Carol and let her know that had I known I would have been there to show my respect to the family. About 13 years ago when I broke my right arm Carol brought me soup, and when she saw that I had cut my long hair because I couldn’t take care of it, Carol said had she known in time she would have come to take care of my hair for me.

I love and enjoy people, yet I am weird, I love living where I don’t have houses crowded around me. Oh well, anyone that knows me already realizes I am not normal.

There was a change in Larry Efaw & the Bluegrass Mountaineers’ schedule, as Larry’s wife Lisa had a couple of small surgeries and the biggest one isn’t scheduled as yet.

Larry got an invitation to play at IBMA in Raleigh, N.C., with two shows at Lorraine’s Restaurant, which meant Jack Adams was scheduled to pick that five-string banjo. I was so tempted to head for North Carolina, and had my ankle not been giving me a fit I would have been on my way. I even got the directions and distance. However I used my head and not my feet and heart, and stayed home.

Someone posted the last song of the evening, and it was wonderful to see Jack Adams picking with the Bluegrass Mountaineer Band. Yes it helped, but was not the same as being there.

Jack and I corresponded right up to the time of his first performance. This kid was as nervous as a cat who caught its tail in a sewing machine. I am glad that his dad, Jeff Adams, was with him on this journey. No matter how far Jack’s adventures may take him, he will long remember his first trip out.

Jack got to visit Andy Griffith’s amusement place in Mt. Airy, N.C., and he loves Andy Griffith videos. Jack sent me pictures and they are beautiful.

Sunday afternoon, I went to a place called Backyard Stage to see Ma Crow & Co. It is a private venue in the backyard of someone’s home. This is a wonderful place as there’s a small stage built in the backyard. It is not open to the public, just friends of the bands, and you can bring friends with you. Ma Crow & Co. was the last band of the season. I guess I would try to crawl to see this group.

I was joined by Ray Rechenberg, and this is the first time I have seen Ray since he was with shape note singers at Calvary Campus, and the Carcassonne Square dance in July.

I haven’t talked to Les and Pat Wagner this week, and I sure hope they are still improving.

Johnny and Ann Calihan’s daughter Sue Wagner spent a couple of days with them. Sue spends most of her time with her two granddaughters, Olivia and Claire. Sue is looking for a house to buy in this area and is not having very much luck.

Hello Mike and Marcia Caudill I hope to see you before long.

Blackey Days is just around the corner on Oct. 11 and 12. Carcassonne Square Dance will be cancelled on the 12th due to Blackey Days, and it will be held Oct. 19. More on that next week.

Happy birthday to my oldest daughter, Kay Gray, on Sept. 30.