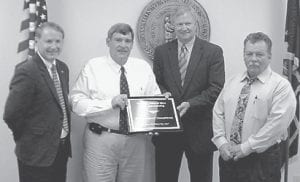 The contests prepare OMSL mine rescue personnel with training for command center and mine rescue operations to respond to major mining disasters.