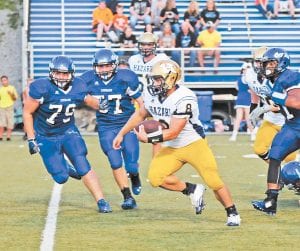 The Letcher County Central Cougars, now 2-1 after falling to Hazard, look to bounce back at home against Pike County Central, which also fell to 2-1 over the past weekend after getting pounded by Williamsburg, 42-14.

The Hawks run a spread offense led by senior quarterback Mac Justice and playing against Letcher Central’s high-powered offense should make for a thrilling game. The game kicks off at 7:30 p.m. at Cougar Field.

The Cougars’ first loss of the season was a 41- 27 defeat at the hands of rival Bulldogs. The Cougars held a 21-20 advantage at halftime, but costly turnovers down the stretch and Hazard running back Brandon Jones’s five rushing touchdowns during the game proved to be the demise of LCC.

Letcher Central won the toss and elected to receive. The Cougars scored when junior running back Jaylyn Williams took a pitch for a six-yard touchdown. Zane Blair made the extra point to give LCC a 7-0 lead. Brandon Jones capped a five-play Hazard drive with a one-yard touchdown plunge. The extra point was wide right to make the score 7-6. 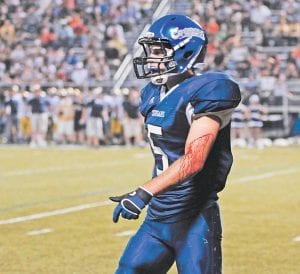 Letcher County Central running back Hunter Hall walked off the field between plays during the first half with blood streaming down his arm. (Photo by Chris Anderson)

On the Cougars’ next possession, Williams scored his second touchdown of the game, this time from 19 yards out. Blair’s extra point sailed through the uprights for a 14-6 Cougars lead. The visiting Bulldogs tied the game up at 14-14 just before the end of the first quarter on a 34-yard touchdown pass from quarterback Tanner Morgan to Cade Fletcher and a two-point conversion by Jones.

The Letcher Central offense went three and out and punted for the first time in the game for either team early in the second quarter. The Bulldogs’ next drive was a methodical 12-play, 75-yard drive that took almost nine minutes off the clock. Jones capped the drive off by scoring from three yards out on 4th and goal to make the score 20-14 in favor of Hazard.

Zane Blair and the LCC offense ran the two-minute hurry up offense to perfection. After starting the drive at their own 35 after the Hazard kickoff went out of bounds, the Cougars wasted little time getting to the red zone and on third and one Blair kept the ball himself on a quarterback option play and got the first down at the Hazard 10-yard line. Two plays later, Blair used the same play to score with only nine seconds remaining in the first half. The extra point gave LCC 21-20 lead at the half.

Both coaching staffs made excellent adjustments at halftime and the third quarter was a defensive battle. The only score of the third quarter was a Jones touchdown run from six yards out and the extra point was good to give the Bulldogs a 27-21 lead. The score was set up by Hazard defensive back Cole Ratliff ’s 20-yard interception return into LCC territory. Hazard started the fourth quarter out with a bang when Jones out of a power- I backfield busted through the middle of the LCC defense for a 67-yard touchdown run. The extra point increased the Hazard lead to 34-21.

The Letcher Central offense regrouped and Blair connected with sophomore receiver Tannar Lucas on a 49-yard touchdown. The two-point conversion was no good but the Cougars cut the lead to 34-27.

The LCC defense stepped up and stuffed Jones on three straight runs to force a punt. Hazard got a first down on a pass after the snap out of punt formation was bad, forcing the punter to throw the ball. Luckily for LCC an illegal man downfield penalty negated the play and made it 4th and 12 forcing the Cougars to attempt to punt again. This time Letcher Central muffed the punt and Hazard recovered it at midfield in a bizarre sequence of plays. This third turnover of the game for the Cougars ended their chances of winning as Jones scored his fifth rushing touchdown of the game, this time from three yards out with less than a minute to play, to give Hazard a 41- 27 victory.

In a similar fashion to many of the LCC losses last year, costly turnovers down the stretch proved the difference in the game. Letcher Central turned it over on three of its last four possessions.

Jaylyn Williams had two touchdown runs and Zane Blair had a touchdown rushing and passing for the Cougars. Receiver Tannar Lucas had a receiving touchdown for the third consecutive game.

The defense had a tough time containing running back Brandon Jones, who finished the game with 237 yards rushing on 26 carries and five touchdowns.