HBO series follows crew trying to ‘make it’ in NYC 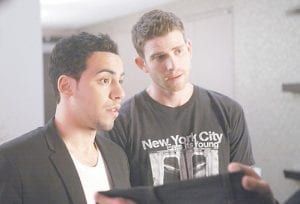 Bryan Greenberg, right, and Victor Rasuk are shown in a scene from the HBO original series, “How to Make it in America.” (AP Photo)

It’s “Sex and the City” for twenty somethings, but without the couture and cosmos.

HBO’s new series “How to Make It in America” looks at urban youth as they chase success in today’s murky economic climate. The show follows a crew of hip, street-smart personalities — a dropout, a hustler, a party kid, a working girl — as they try to make it in New York City.

“This isn’t, like, go to college, get your degree, and get your career,” said Bryan Greenberg, who plays Ben Epstein, the show’s anti-hero. “This is like, ‘All right, now what?’ Everybody right now is going through that.”

Ben is a Fashion Institute of Technology dropout folding jeans at Barney’s. He’s just broken up with his designer girlfriend (Lake Bell) and is looking for something, anything, in which to pour his creative juices. “He’s miserable with his life,” Greenberg said.

His best friend, Cam Calderon (Victor Rasuk), is a tenacious hustler, a sometimes vendor of knockoff goods who is constantly roping Ben into ill-fated financial schemes.

“(My) his character is so aggressive,” Rasuk said. “There’s people that talk about doing things and then there’s people that actually do it.” Cam and Ben are opposites, he noted. And their yin-and-yang relationship, paired with a sense of fashion and style, yields a promising plan to launch an upstart jeans company.

The entrepreneurial bent of the duo resonates with the quintessential American spirit — and they’re broke. They borrow startup capital from a friendly stockbroker (Eddie Kaye Thomas) and a loan shark (Luis Guzman), hoping their gamble pays off .

“You got to borrow money,” Rasuk said about starting a new business. “The only way (my character) knows is by borrowing it from an ex-con. That’s where the comedy comes in.”

With each episode, comedic circumstances bury the pair further in debt while other running subplots keep the show light. David (Eddie Kaye-Thomas) has all the money he could ever need, but isn’t cool. He bribes Ben and Cam to get into hot clubs in Manhattan, giving them money to put into the business. Ben’s refusal to let got of his ex-girlfriend is another source of hilarity, leading him to hesitate when meeting other women. Ben takes so long in one scene, that his love interest turns to a gay man instead.

But as mopey and sophomoric as Cam and Ben get when faced with a problem, their dream to launch a line keeps them sunny and alive — more so than when they were slackers.

“There’s a whole younger generation that’s coming up the show sort of taps into,” Greenberg said. “Everybody also wants to be somewhere where they’re not in life. Everybody can relate to that.”

“How to Make It in America” airs Sunday (10 p.m. EST). It is the latest collaboration between “Entourage” executive producers Mark Wahlberg and Rob Weiss, who both direct the show.

On the Net: www.hbo.com/index. html