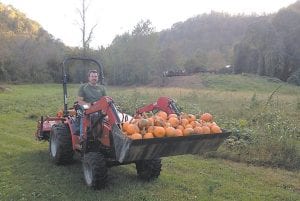 — Chris Caudill harvested 100 baby Pam pumpkins one day this month from his pumpkin patch located near his home at Whitco. He has picked nearly 3,000 pumpkins and has sold all of them to local groups and individuals. Caudill said he doesn’t have many pumpkins left in his garden. He said he planted 10,000 pumpkin seeds the second week in June. This is the second year that Caudill has grown pumpkins. Last year, he picked 700 pumpkins total.