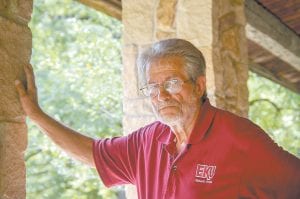 Robert Watts stands outside the visitors center at Lilly Cornett Woods in the Linefork section of Letcher County.

Count the growth rings of a tree and they’ll tell you something about history.

Take the section of tree displayed on the wall at Lilley Cornett Woods Visitors Center. It was wet the year Sir Isaac Newton was born in 1612 and dry when the pilgrims landed on Plymouth Rock in 1620. Dry, too, in 1769, the year the steam engine was invented.

Move toward the outside edge of the tree, and you can trace the years to more recent events. Take 1972. That’s the year Robert Watts went to work in the woods, taking care of these age-old trees.

“The boy that worked here got killed,” Watts said. “I went and took a state test and got hired on.”

He was 23 years old then and a maintenance worker. Now, at 69, he’s the manager of the 630-acre ecological research center, and like the rings of a tree, Robert Watts is a compendium of history of the woods.

Coal miner Lilley Cornett owned the forest, and there’s a large tract he never allowed to be logged or mined. The family gave it to the state of Kentucky in 1969 and the Division of Forestry managed it until 1977, when it was transferred to Eastern Kentucky University. Even though he didn’t work there for the first three years, Watts lived four or five miles away, and grew up hunting the area. 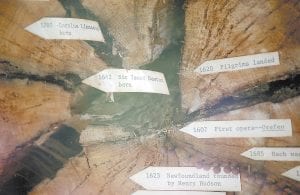 The growth rings on this old tree, which is under cover at Lilly Cornett Woods, offer a lesson in world history.

He knows every nook, every brook, and cranny on the craggy peaks around Linefork Creek.

If you’d like to know where the biggest pignut hickory in the woods is, he can tell you. What about the biggest white oak? It’s on the ridge over yonder. If you’re interested in genealogy, he can even tell you some about the pioneer cemetery behind the visitors center, where graves date to the early 19th century.

Contrary to popular conception, Lilley Cornett Woods isn’t virgin forest. People hunted there, and pigs and other livestock were allowed to run through the hills, eating chestnuts before the great blight killed the chestnut trees, surviving on whatever they could find after. About 250 acres are considered old growth forest, with trees like the section displayed at the visitor center. Many are well over 400 years old.

“We know exactly where it fell,” Watts said. “It was down by a hollow where there was plenty of water.”

They also know when it fell, and how big it was. It’s not even close to being the oldest tree in the forest.

“There one white oak that’s 52 inches in diameter, and it’s up on the ridge,” Watts said. It’s drier there than it is by the hollow, meaning the tree is probably much older than the other one. They won’t know until it falls on its own.

Nothing gets cut down here. Trees fall where they may, and just enough is cut out of them to keep the two hiking trails open.

The forest is protected, and largely undeveloped. Even the area around the visitors center, which has long included a caretaker’s house as well, hadn’t been developed beyond those two structures until a couple of years ago, when EKU decided it would be better to have a lab and sleeping space there than a parking lot.

“We got a research building that has a wet lab and a dry lab, we’ve got a bunk house that will sleep 10 people, it has a full kitchen for people doing research, and we bought the next little farm up,” Watts said, waving toward the head of Linefork. “It’s got a house and a barn and it’ll sleep about 10 people.”

So what exactly would 20 people do at Lilley Cornett Woods for days on end? They might wade in one of the cleanest streams in Kentucky, collecting bugs and fish to study. Or they might study the weather using the equipment near the old log cabin just inside the entrance to the woods. They might study the trees themselves for everything from growth patterns to climate change to invasive insects that can threaten forests. They might collect pollen or nuts from an ancient blight-resistant American chestnut to try to bring back the once-dominant king of the Appalachian hardwoods.

That American chestnut is a rarity, a treasure hidden in the hills and hollows of the original 554-acre tract.

Of course, Robert Watts knows where it is. But he’s not talking.