He wants to gather Chinese chestnuts, but your tree’s safe 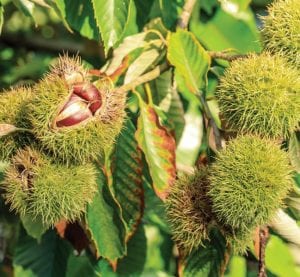 By the time I was five or six years old and big enough to climb it, there was a young, fruiting, Chinese chestnut tree that grew just a few feet behind the porch in the backyard directly behind our house. My grandfather, Mose “Pap” Adams, had planted it and a nearby sibling as seedlings in the mid 1940s.

The tree, practically in our back door, must have been particularly fond of the soil conditions because it grew about three times faster and larger than its twin sibling, situated less than 100 yards away, on the backside of one of our vegetable gardens.

The tree in the garden bloomed as profusely as the one behind the house but it seldom produced more than a seasonal handful of mature nuts. Apparently the wind on Blair Branch only blew in one direction during June when the trees were in full bloom. The tree in our yard was consistently loaded down with mature nuts. Our theory was that it was downwind of its sibling and the latter’s pollen fertilized it. Since the wind didn’t blow in the other direction, the only way the garden tree was apt to be pollinated would have been by bees or wasps carrying pollen from the other tree. Chinese chestnut blooms are white and shaped like fuzzy rat tails and up to a foot long. They have a rather pungent smell and I find it reasonable to assume than most self-respecting bees would not visit them if anything else was blooming. In any event, there was seldom any reason to go to the garden if we wanted to find any chestnuts.

In case you don’t already know, chestnuts grow inside “burrs” that are roughly the size and shape of tennis balls or a bit smaller. The burrs are covered with dozens of tiny nettles that become razor sharp when the nuts inside them start to ripen. The burrs change color from emerald green to golden yellow when the nuts are ripe. If left unbothered on the trees, the burrs will open and spread into four, equal sections and allow the dark brown nuts, anywhere from one to half a dozen per burr, to fall to the ground.

But patience was never my strong suit. I discovered early on that it was easy to climb the tree and shake its limbs to make it literally rain ripe chestnuts. The problem with shaking the tree was that doing so also caused the nettle-covered burrs to fall. If a burr had not opened enough for the nuts to fall out it would weigh enough to cause some serious pain when its nettles pierced anybody who might be standing under the tree or, in my case, up among its branches.

And up among its branches was where I wanted to be every day, after school from mid September until the tree was bare in mid October. I would wear Dad’s mining safety helmet, leather gloves and his heavy, denim jacket to fend off the falling burrs and still, oftentimes, get “wounded” if one hit one of my legs and caused the nettles to go through my pants legs.

Unlike their much larger, imported, European cousins, Chinese chestnuts dried hard as rocks within a few days of harvest and it became impossible to eat them raw. We usually boiled them for 10 or 15 minutes, cooled them down with cold water, peeled off the hulls with our pocketknives and ate them as nighttime snacks. I also remember swapping one of my teachers a candy bag full of boiled chestnuts for the apple he’d brought for lunch that day.

Last summer, in a suburb some three miles southeast of Richmond, I happened upon a small stand of fewer than a dozen chestnut trees that I assume to be of Chinese descent. They were covered with burrs but I forgot all about them last fall when they would have been falling.

That neighborhood also has a conspicuous population of squirrels that I’ll have to compete with, but come next September I intend to see if I can’t gather a few chestnuts. Don’t worry. Neither Loretta nor Mr. Parkinson will allow me to be climbing the trees.