‘He was a really good brother …’ 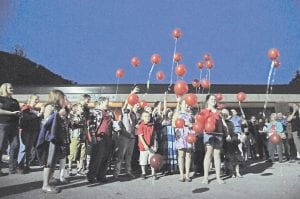 Friends and classmates of the late Trent Carty release balloons in his honor during a candlelight vigil Friday evening. Trent’s younger brother, Ethan Alexander Carty, at center in red shirt, took part in the balloon released and spoke during the ceremony about Trent, saying he was “a really good brother” who always looked out for his siblings. (Photo by Chris Anderson)