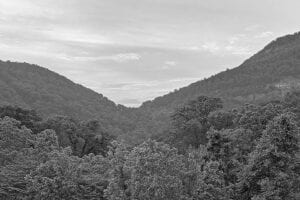 Pictured above is Cumberland Gap, where the states of Kentucky, Virginia and Tennessee meet. A group of eight men survived the route in traveling to present-day Louisville in 1777.

The Virginia legislature commissioned Col. George Rogers Clark to assemble an army of men and travel to the Falls of the Ohio, near present-day Louisville, in the early winter of 1777. Their mission was to thwart the British in creating outposts in that region.

Most of the men left before Christmas but a group of eight followed in late January to join them.

A youthful Daniel Trabue was among the latter party of men and he provided a narration of their exploits. His recollection of their encounter with Indians in the area that is now Middlesboro, Kentucky, is of particular interest.

Trabue said their spirits were high as they traveled along lush well-watered valleys and across steep mountains. As they traveled through Powell Valley their moods changed to apprehension as they passed the ravages of cabins that had been burned or destroyed by Indians. Many homesteaders were killed. Others returned to safety in the east while some continued their westward migration. The year 1777 became known as the year of the sevens because of the high level of Indian activity.

The company of men passed beneath the landmark ‘White Rocks,’ near present-day Ewing, Virginia, and they camped in an abandoned cabin four miles east of their passageway destination, Cumberland Gap.

Although it had been a blustery, rainy night, the morning was clear as they approached the Gap where they found fresh Indian tracks that indicated they were traveling in the same direction.

The men readied their arms and put additional bullets in their mouths so they would be ready to quickly reload. Their guns would fire only one shot before reloading. The men were exhorted to fight their best if the Indians were encountered.

Two scouts walked 100 yards in front and were to jump aside behind trees if the Indians were spotted. The others would then dismount and run ahead to help them fight. A young boy was assigned to stay with the horses in the event fighting commenced. One of the men named Lucas said he looked forward to an encounter with the Indians as he could shoot, use a tomahawk and wield a butcher knife. He boasted that he could take care of five Indians by himself.

Trabue sensed the historical significance of passing through Cumberland Gap when he later recalled, “It seemed like we were going out of the world.” That was true in that era because, until just a few years before, the mountain range had prohibited expansion beyond. They discovered fresh Indian tracks as they passed Indian Rock near the saddle of the Gap.

At the northern base of Cumberland Mountain the markings went in three directions. The men maintained their alertness and agreed among themselves that it was important that they be resolute in their actions when the Indians were encountered. Young Daniel Trabue said he felt “chicken-hearted” because Lucas was so anxious for battle. He was afraid they would be defeated, and he honestly felt he may die “in the howling wilderness” that is now Middlesboro. Trabue gained new courage as he talked with Lucas. He realized he could load and shoot as good as most men, and he was also fleet afoot.

Suddenly the two men ahead jumped from the path and hid behind large trees. “As quick as cats” the men jumped from their horses and ran ahead to where they could see the Indians “running, jumping and dodging away.”

The men pursued the Indians for a short distance before returning to their horses. There they found Lucas hiding behind a tree. He had been so eager to fight the Indians but was terrified when they appeared. The party then methodically trudged deeper into Kentucky, crossing the Cumberland Ford at present-day Pineville and staying ever alert until they passed beyond Indian War Road at Flat Lick.

Indian War Road, also called Warrior’s Path, was part of an ancient system of Indian trails leading from Georgia and the Carolinas through eastern Tennessee to Cumberland Gap. The Trail then continued to Flat Lick where it turned northward to the Ohio River.

The men arrived at Boonesborough, on the banks of the Kentucky River on Easter Sunday, April 19, 1778. The residents ran out to greet them and they feasted on the best that they had.

Soon they proceeded west with George Rogers Clark who would earn his place in history.

l Jadon Gibson is a freelance writer from Harrogate, Tennessee. His stories are historic and nostalgic in nature. Thanks to Lincoln Memorial University, Alice Lloyd College and the Museum of Appalachia for their assistance.