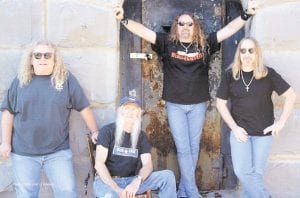 Grammy Award winners The Kentucky Headhunters will perform Monday night at part of the City of Whitesburg’s annual Labor Day celebration. The band will perform at River Park at 8 p.m.

A Grammy Award-winning country rock band will headline the City of Whitesburg’s Labor Day Celebration on Monday at River Park.

The band from Metcalfe County, in western Kentucky, won a Grammy in 1990 for best country performance by a duo or group with vocal for the album “Pickin’ On Nashville.” The Kentucky Headhunters also won Country Music Awards in 1990 and 1991 for vocal group of the year and album of the year. In 1990 the Headhunters won a Billboard Music Award for best county and western vocal performance. The group was named favorite new artist by the American Music Awards in 1990 and 1991.

A fishing tournament for children and teens 16 and under will begin at the River Park at 12 p.m. and will end at 4 p.m. For those who do not have fishing poles, Frank Campbell of the Kentucky Department of Fish and Wildlife will have 25 on hand to be used during the tournament.

A corn hole tournament, organized by Tim Lucas, will begin at 4 p.m. Registration is at 3:30 p.m.