Health care law may enable 5 million addicts to get help 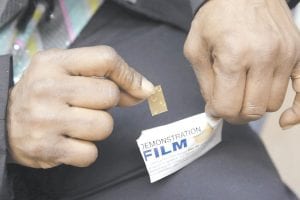 A recovering heroin addict holds a demonstration dose of the medication Suboxone during an appointment at the West Division Family Health Center in Chicago. Each dose is incorporated on a dissolvable film, which is placed below the tongue where is dissolves and is absorbed into the bloodstream. Suboxone helps suppress withdrawal symptoms and reduce cravings for people recovering from addiction to opioid drugs. (AP Photo)

It has been six decades since doctors concluded that addiction was a disease that could be treated, but today the condition still dwells on the fringes of the medical community. Only 1 cent of every health care dollar in the United States goes toward addiction, and few alcoholics and drug addicts receive treatment. One huge barrier, according to many experts, has been a lack of health insurance.

But that barrier crumbles in less than a year. In a major break with the past, 3 million to 5 million people with drug and alcohol problems — from homeless drug addicts to working moms who drink too much — suddenly will become eligible for insurance coverage under the new health care overhaul.

The number of people seeking treatment could double over current levels, depending on how many states decide to expand their Medicaid programs and how many addicts choose to take advantage of the new opportunity, according to an Associated Press analysis of government data. The analysis compared federal data on the addiction rates in the 50 states, the capacity of treatment programs and the provisions of the new health law.

The surge in patients is expected to push a marginal part of the health care system out of church basements and into the mainstream of medical care. Already, the prospect of more paying patients has prompted private equity firms to increase their investments in addiction treatment companies, according to a market research firm. And families fighting the affliction are beginning to consider a new avenue for help.

“There is no illness currently being treated that will be more affected by the Affordable Care Act than addiction,” said Tom McLellan, CEO of the nonprofit Treatment Research Institute and President Barack Obama’s former deputy drug czar. “That’s because we have a system of treatment that was built for a time when they didn’t understand that addiction was an illness.”

But those eager for a new chance at sobriety may be surprised by the reality behind the promise. The system for treating substance abuse — now largely publicly funded and run by counselors with limited medical training — is small and already full to overflowing in many places. In more than two-thirds of the states, treatment clinics are already at or approaching 100 percent capacity.

The new demand could swamp the system before even half of the newly insured show up at the door, causing waiting lists of months or longer, treatment agencies say. In recent years, many rehab centers have been shrinking rather than growing because of government budget cuts for patients who receive public support.

“Advocates just get so excited, but at some point, reality is going to hit and they’ll find it’s not all it was cracked up to be,” said Josh Archambault of the Pioneer Institute, a nonpartisan public policy research center in Boston.

In the coming years, treatment programs and medical colleges will face pressure to ramp up to create a larger system.

But until then, addiction treatment may represent an extreme example of one of the Affordable Care Act’s challenges: actually delivering the care that people are supposed to receive.

Many with substance problems are waiting eagerly for January, when the new insurance will become available.

“It’s the chance to clean up and not use anymore, so I could live a stable life,” said 30-year-old Ashley Lore of Portsmouth, Ohio, who was jailed and lost custody of her 4-year-old daughter as a result of her heroin addiction. “If I get into treatment, I get visitation to my daughter back. And I get her back after I complete treatment.”

Only about 10 percent of the 23 million Americans with alcohol or drug problems now receive treatment, according to the National Survey on Drug Use and Health. Shame and stigma are part of the reason but about a quarter of them don’t have insurance coverage. That compares with the overall uninsured rate of 16 percent.

With money for treatment limited, slots in rehabilitation centers and hospitals are scarce. In Minnesota, which has one of the higher substance abuse rates in the nation — 11.6 percent of the population — there are slightly more than 3,900 inpatient beds for the 491,000 people who need treatment, according to federal data. Occupancy is over 100 percent.

Insurance can mean the difference between getting a spot or waiting indefinitely for publicly subsidized help.

Michelle Hines, an Illinois mother, had both experiences when her 19-year-old son became part of a disturbing new trend: suburban teenagers hooked on heroin.

Because he was uninsured, the wait would stretch to a month or six weeks for a public bed. His parents, who own a small business, couldn’t afford the $2,000-per-month injections to block the heroin high. Overall, outpatient programs cost about $10,000, and a residential treatment stay about $28,000.

Everything changed after her son was able to get coverage under the family’s insurance plan because of an early benefit of the Affordable Care Act.

They now pay only $40 a month for the shot that helps him stay clean. “He’s working hard at getting his life back together,” Hines said. “He’s in school full time; he’s got a job.” (Michelle Hines asked that her son’s name be withheld to avoid hurting his future employment prospects.)

Nine alumni of Hines’ son’s high school have died from drug overdoses. “A waiting list for a heroin addict could mean death,” Hines said. “So many have died waiting, it’s awful.”

Today, those without insurance include many lower- and middle-income people who don’t get the benefit from an employer — businesses provide coverage for about 50 percent of Americans — don’t qualify for Medicaid or Medicare and can’t afford their own policies.