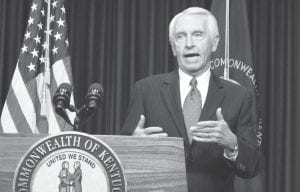 The debut of a statewide online health insurance marketplace, of which Gov. Steve Beshear has been a big proponent, has been voted Kentucky’s top story of 2013. (AP Photo/ Roger Alford)

The debut of a statewide online health insurance marketplace, which earned a thumbs-up from President Barack Obama for smoothly enrolling tens of thousands of people, has been voted Kentucky’s top news story of 2013.

Unlike the technical glitches that marred the federal health benefit exchange, the rollout in Kentucky went much better.

Kentucky built its own exchange, the result of an executive order by Gov. Steve Beshear, a Democrat. Expanding medical coverage, he said, would benefit a state with about 640,000 uninsured residents. The state also ranks among the nation’s unhealthiest, with high rates of heart disease, cancer and diabetes.

His decision drew the scorn of conservatives and spurred a lawsuit.

The state received more than $250 million from the federal government to set up its exchange. The online marketplace for people to shop for insurance coverage was the centerpiece of the Affordable Care Act.

Enrollment began Oct. 1, and by Friday, more than 96,000 Kentuckians had signed up for new health coverage, including slightly more than 72,000 in Medicaid and the rest in private insurance, according to the governor’s office. Coverage is set to begin Jan. 1.

Beshear’s enthusiasm for the embattled health care law, and the performance of Kentucky’s exchange, drew national attention. The governor received a personal thank you from Obama.

“I continue to hear daily from constituents who are upset and angry that ‘Obamacare’ means higher premiums and deductibles and less access to the doctors and hospitals they trust,” Mc- Connell said.

The health care developments were selected as the year’s biggest story in Kentucky in voting by subscribers and staff for The Associated Press.

Kentucky’s No. 2 story was the downfall of Richie Farmer, a oncebeloved University of Kentucky basketball standout whose political career crashed in scandal. Farmer pleaded guilty in a government corruption case that could send him to prison for two years. He’s scheduled to be sentenced in January.

A remorseful Farmer told a federal judge that he let down his family, friends and the state. He agreed to plead guilty to two counts of misappropriating government resources while overseeing the Kentucky Department of Agriculture.

Farmer, a Republican, was easily elected twice as the state’s agriculture commissioner.

His celebrity as a sharp-shooting guard for UK two decades ago seemed to have him rising toward higher office. Farmer’s political career came apart during a bid for lieutenant governor in 2011 when complaints began to surface about his management of the agriculture department.

Other stories among the top votegetters were the struggles in the eastern Kentucky coalfields, the ambush slaying of a Bardstown police officer and the unfolding U.S. Senate race next year as McConnell tries to fend off challenges from Democrats and within his own party.

The region’s coal industry has been mired in a deep slump, brought on by an ongoing shift from coal-power to natural gas. Stricter environmental restrictions on heat-trapping pollution from coal-fired power plants are widely blamed for hastening the downturn.

Several thousand miners in the state have lost their jobs over the past two years.

Bardstown police officer Jason Ellis was gunned down May 25 while headed home. He was hit with multiple shotgun blasts after he got out of his cruiser to pick up tree limbs on an exit ramp. Police think the debris was put there intentionally so he would stop.

Ellis’ death led to an outpouring of grief in Bardstown, a town of about 12,000 people some 40 miles southeast of Louisville.

An exhaustive police investigation has not yet resulted in an arrest.