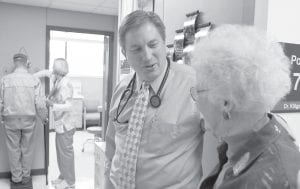 Primary care physician Dr. Don Klitgaard greeted Muriel Bacon as her husband weighed in with a nurse at the Myrtue Medical Center in Harlan, Iowa, recently. Lines to see physicians such as Klitgaard could get longer under the landmark health overhaul signed into law. (AP Photo)

Better beat the crowd and find a doctor.

Primary care physicians already are in short supply in parts of the country, and the landmark health overhaul that will bring them millions more newly insured patients in the next few years promises extra strain.

The new law goes beyond offering coverage to the uninsured, with steps to improve the quality of care for the average person and help keep us well instead of today’s seek-care-afteryou’re sick culture. To benefit, you’ll need a regular health provider.

Yet recently published reports predict a shortfall of roughly 40,000 primary care doctors over the next decade, a field losing out to the better pay, better hours and higher profile of many other specialties. Provisions in the new law aim to start reversing that tide, from bonus payments for certain physicians to expanded community health centers that will pick up some of the slack.

A growing movement to change how primary care is practiced may do more to help with the influx. Instead of the traditional 10-minutes with-the-doc-style office, a “medical home” would enhance access with a doctor-led team of nurses, physician assistants and disease educators working together; these teams could see more people while giving extra attention to those who need it most.

“A lot of things can be done in the team fashion where you don’t need the patient to see the physician every three months,” says Dr. Sam Jones of Fairfax Family Practice Centers, a large Virginia group of 10 primary care offices outside the nation’s capital that is morphing into this medical home model.

“We think it’s the right thing to do. We were going to do this regardless of what happens with health care reform,” adds Jones. His office, in affiliation with Virginia Commonwealth University, also provides hands-on residency training to beginning doctors in this kind of care.

Only 30 percent of U.S. doctors practice primary care. The government says 65 million people live in areas designated as having a shortage of primary care physicians, places already in need of more than 16,600 additional providers to fill the gaps. Among other steps, the new law provides a 10 percent bonus from Medicare for primary care doctors serving in those areas.

Nationally, the big surge for primary care won’t start until 2014, when the bulk of the 32 million uninsured starts coming online.

Sooner will come some catch-up demand, as group health plans and Medicare end co-payments for important preventive care measures such as colon cancer screenings or cholesterol checks. Even the insured increasingly put off such steps as the economy worsened, meaning doctors may see a blip in diagnoses as those people return, says Dr. Lori Heim, president of the American Academy of Family Physicians.

That’s one of the first steps in the new law’s emphasis on wellness care over sickness care, with policies that encourage trying programs like the “patient-centered medical home” that Jones’ practice is putting in place in suburban Virginia.

It’s not easy to switch from the reactive — “George, it’s your first visit to check your diabetes in two years!” — to the proactive approach of getting George in on time.

Then came a patient registry so the team can start tracking who needs what testing or follow-up and make sure patients get it on time.

Rolling out next is a custom Web-based service named My Preventive Care that lets the practice’s patients link to their electronic medical record, answer some lifestyle and risk questions, and receive an individually tailored list of wellness steps to consider.

Say Don’s cholesterol test, scheduled after his yearly checkup, came back borderline high. That new lab result will show up, with discussion of diet, exercise and medication options to lower it in light of his other risk factors. He might try some on his own, or call up the doctor — who also gets an electronic copy — for a more in-depth discussion.

“It prevents things from falling through the cracks,” says Dr. Alex Krist, a Fairfax Family Practice physician and VCU associate professor who designed and tested the computer program with a $1.2 million federal grant. In a small study of test-users, preventive services such as cancer screenings and cholesterol checks increased between 3 percent and 12 percent.

Pilot tests of medical homes, through the American Academy of Family Physicians and Medicare, are under way around the country. Initial results suggest they can improve quality, but it’s not clear if they save money.

Primary care can’t do it alone. Broader changes are needed to decrease the financial incentives that spur too much specialistdriven care, says Dr. David Goodman of the Dartmouth Institute for Health Policy and Clinical Practice.

“What we need is not just a medical home, but a medical neighborhood.”