Hearing set for man who led cops on chase

This screen shot captured from footage taken by a camera located high above Whitesburg shows a truck driven by Zachary Lockhart (far left) leading a parade of police cars to a ramp leading to the Whitesburg Bypass.

Preliminary hearing will be held July 29 for a Tennessee man arrested after a pursuit that started in Harlan, went all the way to Whitesburg and ended at Cumberland.

He is being held in the Harlan County Detention Center in lieu of a $20,000 bond.

The chase, which at times slowed to 25-30 miles per hour through town, involved police from two counties and eight departments as police attempted to get in front of the truck and create a moving roadblock. The truck slipped past them, however, and continued back the direction from which it had originally come. 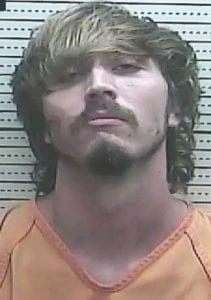 Zachary Lockhart of Kingsport, Tennessee, is now being held in the Harlan County Dentention Center.

The pursuit began in Harlan after a black Dodge pickup truck hit two parked cars in downtown on US 421 South and then fled, only to be spotted on US 119 north of the city. Harlan Police chased the “through several jurisdictions” and into Letcher County, across Pine Mountain and back again.

It passed through downtown

Whitesburg at low speed with nine police cars trailing it. It ended about a half hour later just across the Harlan County line at Blair, after two of the pickup’s tires were deflated when it ran over spike strips. The driver had allegedly hit police cars belonging to the Harlan and Cumberland police departments during the pursuit, as well.