Hearing set in the case of woman charged with attempted murder 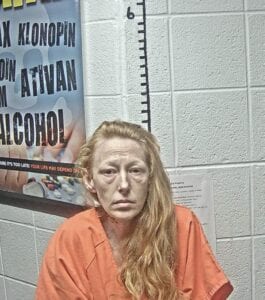 A Yonts Fork woman is in the Letcher County Jail in lieu of a $100,000 cash bond after pleading not guilty to a charge of attempted murder for allegedly shooting her husband during an altercation at their home.

After Natasha Gibson pleaded not guilty April 30, a preliminary hearing was set for May 11 at 3 p.m. in Letcher District Court.

The incident occurred about 11:40 p.m. last Thursday night. KSP Detective Robert Dials arrived at the Gibson home after a report of shots fired.

According to the citation issued in the case, KSP Trooper Tyler Smith was already on scene and had interviewed Can Gibson, who said his wife had shot him during an altercation. There was no information available about what kind of altercation it was, or what it was over.

Dials arrested Natasha Gibson at 6:34 a.m. at Jackhorn, according to the citation. She was still in jail late Tuesday.