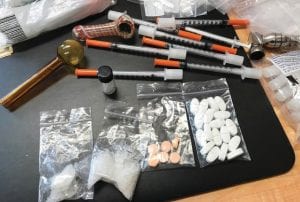 Above, 18 grams of crystal meth, syringes, and other drugs were confiscated from a Haymond trailer on February 7.

Prelminary hearings are set for February 14 for three of four suspects arrested in two separate meth cases last week. The fourth suspect will next appear in court February 21.

Three people were arrested and 18 grams of crystal meth, or “ice,” were recovered at 1:40 p.m., February 7 after Sheriff Mickey Stines and deputies Mike Enfusse and Josh Pease went to a mobile home at Haymond to serve indictment warrants against a man charged with failure to pay child support and with being a persistent felony offender.

After being given permission to conduct a “fugitive search” by the trailer’s owner, 54-year-old Ruth E. Adkins, Stines and the two deputies saw a small plastic bag containing what they believed to be meth lying on a bed. A more extensive search of the home and Mrs. Adkins’s purse turned up larger quantities of meth, along with dozens of syringes and three pipes used to inject and smoke the highly addictive stimulant. Also recovered were a set of digital scales, $3,000 in cash, 18 tablets of Neurontin, a drug used to control seizures and nerve pain, and five and one-half tablets of the addiction-fighting drug buprenorphine. 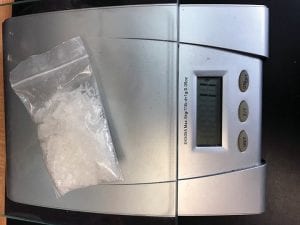 At right is an 11-gram packet of crystal meth confiscated from a truck at Mayking on February 6. The truck had earlier been reported stolen. (Eagle photos)

Mr. and Mrs. Adkins and Richie will appear in court February 14.

The arrests in Haymond came one day after a 56-year-old Whitesburg man was charged with first-degree possession of methamphetamine after sheriff ’s deputies found him passed out in a vehicle parked outside the Mayking Volunteer Fire Department. Billy Wayne Spangler, of 104 Firefly Drive, was charged at 1:38 p.m. February 6 after deputies Pease and Enfusse searched the vehicle he was in — which earlier had been reported as stolen — and found a small black case that was holding a plastic bag containing 11 grams of crystal meth and two syringes.

Spangler, whose preliminary hearing is February 21, is also charged with receiving stolen property, operating a motor vehicle under the influence of alcohol or drugs, and with driving on a license suspended for a previous DUI conviction (second offense). Spangler told the deputies he had purchased the older-model Chevy Tahoe for $2,500.