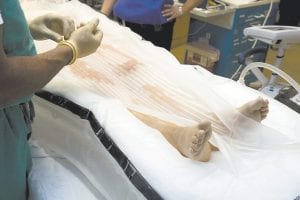 A Thermosuit in-use is placed on top of the patient at Ochsner Hospital in Jefferson, La., a suburb of New Orleans. A pump rapidly inflates the bean-shaped plastic pool around the patient as doctors Velcro on a plastic topsheet. Tubes spray naked patients with frigid water as other tubes drain it away, taking heat from the patient’s skin with it. (AP Photo)

It took five mighty shocks to get Cynthia Crawford’s heart to start beating again after she collapsed at Ochsner Clinic a few weeks ago. A dramatic rescue, to be sure, yet it was routine care she could have had at any hospital.

What came next, though, was not.

As she lay unconscious, barely clinging to life, doctors placed her in an inflatable cocoon like pool that sprayed her naked body with hundreds of icy cold jets of water, plunging her into hypothermia.

“Like jumping in the North Sea,” said the cardiologist leading her care, Dr. Paul McMullan.

Days later, Crawford was recovering without the brain damage she might have suffered.

For years, doctors have tried cooling people to limit damage from head and spinal cord injuries, strokes and even prematurity and birth trauma in newborns. It’s also used for cardiac arrest, when someone’s heart has stopped. In January, New York will join several other cities requiring ambulances to take many cardiac arrest patients to hospitals that offer cooling.

Now doctors will be testing a new and dramatically speedier way of doing this for a much more common problem — heart attacks, which strike a million Americans each year.

“It’s extremely appealing” because the cooling system is non-invasive and can be used in an ordinary hospital room, said Dr. George Sopko of the National Heart, Lung and Blood Institute, which is paying for this first-ofa kind study.

Animal research suggests it will help, “but we need the hard evidence” from human tests to know, he said.

Heart attacks occur when an artery gets blocked, depriving the heart muscle of oxygen and blood, and causing part of it to die. But the damage doesn’t happen all at once — cells die off slowly, sending chemical messages that make neighboring cells do the same. Cooling the body to around 90 degrees from its usual 98.6 slows this down.

“Tissue that would have died, were it not cooled, can stay alive,” McMullan explained.

Cooling has been around — you may have heard of it last year when it was used experimentally on Buffalo Bills football player Kevin Everett’s spinal cord injury. Doctors pumped frigid saline into his veins to reduce inflammation and give things a chance to heal.

Half a dozen companies sell tools to do this — tubes that go into veins or the belly cavity, fancy ice bags and gel packs, blankets with cold saline inside, fans blowing cold air over patients, even a skullcap to cool the head.

Surgeons use cooling now during open-heart surgery, and promising results from a few studies several years ago led the American Heart Association to recommend it for cardiac arrest patients, whose hearts have stopped.

“The problem with all these trials is the cooling was too slow,” taking as long as six hours with some devices, said the leader of one key study, Dr. Michael Holzer of Medical University of Vienna in Austria.

That’s too pokey for treating heart attacks, where doctors must move at warp speed to open the clogged vessel and keep the initial injury as small as possible — the “time is muscle” message we often hear.

The only big study of cooling for heart attacks — 392 patients given cold saline through a big vein — failed to show benefit, said its leader, Dr. William O’Neill, executive dean of clinical affairs at the University of Miami’s Miller School of Medicine.

However, the cooling was only a few degrees and took an average of 75 minutes.

“We believe the reason the trial didn’t work is they didn’t cool them fast enough,” McMullan said.

His proof: People in the study whose temperatures were below 95 degrees at the time they had their artery-opening procedures wound up with only half the heart damage of the others, who were not cooled so much or so quickly.

Which is why doctors at Ochsner (pronounced OSH-ner) have high hopes for the ThermoSuit, made by Life Recovery Systems in Waldwick, N.J.,and designed by a former Air force flight surgeon, cardiologist Robert Freedman of Alexandria, La.

A pump rapidly inflates the pool-like suit until it puffs up tightly around the patient as doctors Velcro on a plastic topsheet. Tubes spray naked patients with frigid water as other tubes drain it away.

The clinic has not yet had the type of heart attack patients called for in the new study. But McMullan has used the suit on 12 cardiac arrest patients, like Crawford, and cooled them to around 90 degrees in as little as nine minutes, typically in about half an hour.

“That’s fabulous and that is very quick. That’s the kind of speed we’re going to need” for this to be practical and useful, said Dr. Lance Becker, a University of Pennsylvania doctor and Heart Association spokesman who led cooling experiments in animals.

On the morning of Nov. 11, when Crawford went into cardiac arrest, she had just arrived for an appointment to see if her badly weakened heart qualified her to be on a transplant list. A doctorin training found her slumped near the elevators, and emergency workers shocked her with a defibrillator to restart her heart.

Soon, McMullan and 10 other doctors and nurses were furiously working on the 56-year-old patient as more staff huddled outside a small window in the hall, craning for a peek at the cooling suit spectacle going on inside.

“Isn’t that something? Will you look at that,” one of them muttered.

Crawford’s temperature dropped to 90 degrees in about 40 minutes. Days later, her family marveled at how well she had come through.

“We called her an icicle,” said her daughter, Sarah Crawford, a Tulane University student majoring in public health. “Her brain function is perfect. We were very grateful that that happened, and that she was at Ochsner,” which is a 90-minute drive from her home in Brusly, La., near Baton Rouge.

Cardiac arrest patients usually are unconscious; heart attack patients will be given sedatives and a drug to limit shivering. The sedatives would be given anyway in preparation for the artery-opening procedure, McMullan said.

There are potential risks: Cooling could trigger a heart rhythm problem, cause loss of fluids, a blood pressure drop, an imbalance of essential body salts, even respiratory problems.

A ThermoSuit system costs a hospital around $30,000, and each single-use suit is $1,600. Federal officials have given previous grants totaling $1.3 million to develop the suit, and are spending $700,000 for the 20-patient heart attack study at Ochsner.

“These are dead people, and they walk out of the hospital. One of them was a mother with six children,” he said.

Another was Steve Benton, 52, treated with the suit in April.

“They came out and told my dad that I was dead,” but he wound up being revived and survived without any brain damage. He is now back at work as a landscaping contractor.