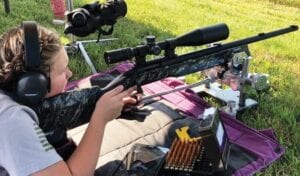 17-year-old Zoe Phillips practices the sport she picked up after a heart condition forced her to quit soccer, and softball. (Photo courtesy the Commonwealth Journal of Somerset.)

Editor’s note: Zoe Phillips is the granddaughter of Daniel and Cecilia Bates, formerly of Cowan, now of Pulaski County, where this story appeared recently.

Focus and precision. Stability and aim. Knowing when to take your shot. Controlling your breathing and listening to your heartbeat. That’s just part of the criteria for being a world-class competitor in mid-range and long-range rifle shooting.

For 17-year-old Zoe Phillips, that control over her breath and heart rate takes a special significance.

The Science Hill youth has participated in sports practically her whole life, she said, mainly in team sports like soccer, basketball and softball.

But she was also born with a heart defect that started to make those team sports hard for her in her teens — to the point where she had to give them up.

But she turned to the sport of rifle shooting — one that allowed her to lay prone and use her precision and skill to rise in the ranks.

Now, after a marathon heart surgery and being on the mend, Zoe is continuing to hone her skills in shooting while hoping to jump back into team sports for her upcoming senior year of high school.

Zoe and her parents, Erica and Billy Phillips, explained that Zoe was born with a unicuspid aortic valve, a condition where there is only one “flap” that opens and closes on the aorta, where normally there should be three.

Where the other two flaps should have been sealing the valve during a normal heartbeat, they were left open, causing blood to leak when it shouldn’t and causing too much pressure on the valve.

Zoe explained that she also has a condition where the cartilage that connects her ribs and sternum keeps growing causing her ribcage to shift “up and out.”

“The heart condition, on top of that, made me super tired,” Zoe said. “I tried to play high school basketball in eighth grade, because eight graders could go up and play for the high school. And it was just not happening. I would get too tired, and would get super light-headed.”

Her heart condition was worsening, and Erica said the coach was starting to get concerned.They had no choice but to pull her from the teams.

The Pulaski County High School junior has also gone to virtual learning through the COVID-19 pandemic.

Over the past few years, Zoe set her sights on shooting as her new sport.

“I’ve been shooting since I was little, going with my dad to the range or anything like that,” Zoe said.

“It’s kind of funny, because they were going to shooting matches, and I didn’t have anybody I could go stay with and I didn’t want to stay home alone, so I went with them. And at the end of the match, [the match director] he asked me if I wanted to lie down and shoot because they had extra bullets. And so, whenever I laid down and shot, it popped up pretty good scores.”

Her first match was in November 2017 in Raton, New Mexico. From there, she went on to the nationals.

This was still when she was 16, one of the youngest competitors on the team, according to mom Erica.

Her focus is in midrange and long-range target shooting, hitting targets up to 1,000 yards away.

She continued to do well in her competitions, earning medals in both the Junior Nationals and the Nationals.

“And then we had to take a little bit off, because her health went down,” Erica said.

In September, 2020, Zoe ended up needing to have open heart surgery.

“That was kind of a mess,” Zoe said. “It was suppose to be a seven-hour surgery. It ended up being a 14-hour surgery, because they got in there and my right coronary artery was small.”

Billy said the surgery was needed because Zoe’s valve problems were starting to worsen, allowing more blood leakage and preventing her blood from oxygenating like normal.

Zoe said she could tell a difference in her health very quickly after the surgery.

“I think it was like day three or four after surgery, I looked at mom and I said, ‘I feel way better now than I did just right before my surgery.’ It’s crazy. I walked up aflight of stairs and passed out before my surgery. My energy levels – I would sleep for 12 hours a day. My energy’s up. I canfinally go and do things that a teenager should be doing.”

Erica agreed that they could tell a big difference after the surgery, “just in her walking and her energy level.”

It was several months of recovery before Zoe could get back into to competition again, but she entered a shoot in Florida in February.

And on her first shoot back after surgery, she earned a pending NRA national record.

The family is waiting on the results to be made of- ficial by the NRA, Billy said.

When asked if it’s a sport that anyone can pick up, Zoe said, “It takes a lot of patience. You really have to want it. … I think people can do it, but I think it’s something people have to want. They can’t do it for a couple or three months and expect to be good at it. It’s a lot of time and money and effort that you’re putting into it.”

For example, she explained that the rifle she uses is custom built, and requires hand-made ammunition created by her father.

Then, it’s knowing how to shoot the rifle.