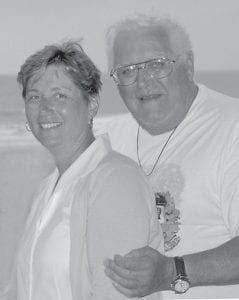 WASHINGTON (AP) — If you have a heart-zapping defibrillator implanted in your chest but now are dying of something else, when do you have it turned off ?

Carol Filak had heard about painful, repeated shocks that people sometimes experience from those implants in their final days.

So when her father, Joseph Hoffman, was diagnosed with terminal cancer, she asked at his cardiologist’s office: What about the defibrillator he’d had implanted years earlier? It’s too soon to worry about, she was told.

Two months later, Hoffman, 81, entered hospice care in his home and still Filak had to make numerous calls to the cardiologist before someone arrived to deactivate the defibrillator. “You need to be told that this is something that’s not going to prolong his life,” says Filak. “When he died, it was a very peaceful death.”

It is not unusual for health professionals to avoid the topic, says Dr. Nathan Goldstein of New York’s Mount Sinai Medical Center.

His research, published this month in Annals of Internal Medicine, suggests most hospices — expert in end-of-life care — are not making defibrillator decisions part of their routine. Nearly 60 percent of hospices he examined had at least one patient shocked within the past year, sometimes multiple times at once.

Yet just one in 20 hospices had a method even to identify who harbored the implant when they entered the program.

But with more than 100,000 implantable cardioverter defibrillators, or ICDs, inserted every year, more and more families like Filak’s will face the question.

“We’re trained to save, save, save, cure, cure, cure,” says Goldstein, who has studied end-of-life defibrillation since seeing a dying lung cancer patient brought to the emergency room because his implant kept firing. “There are some folks we can’t cure. We have to make them as comfortable as possible.”

Defibrillators are implanted to prevent sudden death from a particular irregular heartbeat, by constantly checking heart rhythm and automatically sending an electrical shock to short-circuit that arrhythmia as it forms. Some patients feel a twinge while others describe the shock as a kick in the chest, usually well worth it.

But when death is inevitable, defibrillator shocks that sometimes occur from the final days to final moments of life can cause unnecessary pain and anxiety. Deactivating the shocking function is easy and noninvasive, done via computer at the patient’s bedside.

It is not clear how often ICDs cause distress at the end of life.

But the American Heart Association in 2008 guidelines declared deactivating a defibrillator an ethical end-of-life decision, similar to withholding other treatments in favor of comfort care. The same year, the National Hospice & Palliative Care Organization issued guidelines urging identification of patients with an ICD as they enter hospice care, and explaining that deactivating the device does not cause immediate death but could prevent unneeded shocks — so that patients can make an informed decision to deactivate or not.

While the heart association says deactivation is fairly common, a series of studies published over the last few years suggests many doctors don’t routinely bring up the option, and that patients may view their implant somewhat differently than the decision to, say, stop chemotherapy.

Goldstein, who conducted several of those studies, looked next at hospice practices.

His survey of 414 hospices around the U.S found that 42 percent of patients had their ICDs deactivated while receiving hospice care. Only 10 percent of hospices had a deactivation policy as recommended by the national guidelines, so Goldstein’s team then wrote a model policy for hospices to consider adapting or adopting.

The policy states deactivation is not a requirement for admission to a hospice but may be in line with the hospice care goal of a peaceful death.

“If it isn’t done, then we probably need to do a better job of teaching and informing people that it really is an important option to make end-oflife care the way it should be,” says American Heart Association spokesman Dr. Kenneth Ellenbogen, cardiology chief at Virginia Commonwealth University School of Medicine.

Ellenbogen notes that often, non-cardiologists with little ICD experience are the doctors involved with hospice admission.

An internist recently called him to ask if it was even possible to stop a defi brillator’s shocks in a hospice patient. Ellenbogen sent someone to do the job.

“It would make a big difference to families if they knew this ahead of time,” says Filak, a college nurse who says she learned about deactivation thanks to both a Ph.D. adviser and physician friend.