Heatstroke can happen in minutes 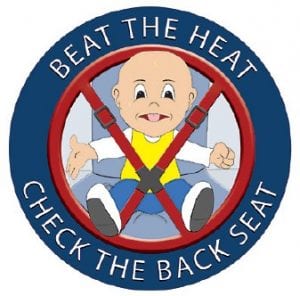 What’s the first thing you do if you’re driving on a hot July day?

Most of us turn on the air conditioning. What if you turn the knob and there’s no relief?

Roll down the windows? What if nothing happens when you push the button?

What happens when the sweat becomes overwhelming and your skin begins stinging? What if you get so hot you get dizzy or you become disoriented? What if you have to fight to keep your eyes open and you become so hot that you feel your body shutting down?

Most of us would throw open the doors gasping for air before we got to that point.

Now imagine being a small child in the same situation, hot, incapacitated and unable to do anything to get to fresh, cool air.

So far, in 2014, at least 17 children have died from heatstroke after being left in a vehicle and experiencing just that.

Children are much more vulnerable to heatstroke than adults. Their tiny bodies heat up three to five times faster than adults.

Heatstroke occurs when a person’s temperature rises to above 104 degrees. Once body temperature reaches 107 degrees, cells are dam aged and organs shut down, eventually leading to death.

A study by the Department of Geosciences at San Franciso State University proved that the temperature in a car on an 80-degree day rises 19 degrees in 10 minutes. In an hour, the temperature rose 45-50 degrees. And “cracking the windows” had little impact on the temperature over time.

In July and August in Kentucky, most days reach into the 90s. That’s 110 inside a locked car in just the time it takes to run into the bank or grocery store. Those temperatures wreak havoc on children’s bodies. Because they heat so quickly, one quick errand can turn fatal.

It’s tough these days to so much as turn on the television or scan Facebook without seeing an instance of a child being trapped in a car. If it’s something we see and are warned of so often, how does it keep happening?

• Never leave a child in an unattended car, even with the windows down.

• Be sure that all occupants leave the vehicle when unloading. Don’t overlook sleeping babies.

• Always lock your car. If a child is missing, check the car first, including the trunk. Teach your children that vehicles are never to be used as a play area.

• Keep a stuffed animal in the car seat and when the child is put in the seat place the animal in the front with the driver as a reminder.

• Place your purse or briefcase in the back seat as a reminder that you have your child in the car.

• Make “look before you leave” a routine whenever you get out of the car.

In 2000, Kentucky passed “ Bryan’s Law,” which makes a person liable for second- degree manslaughter for leaving a child younger than 8 in a motor vehicle where circumstances pose a grave risk of death.

Should the unthinkable happen, not only will you be charged for a crime, you will face the guilt for the rest of your life that comes with ending an innocent life.

And the issue is not only important when children are involved. Temperatures rise just the same whether it’s a child in the car or a pet or an elderly family member.

Be mindful of those around you and the safety of anyone vulnerable to heatstroke.