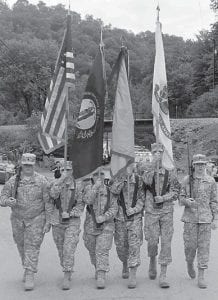 I’m feeling so much sadness this week as I try to write. Watching the funeral procession of John McClain on TV is very sad.

His family having to give up their courageous father and be left here to wait. They’re going, one day in the future, to be with him again.

Then we get more bad news of one of our sweet and loving young women of our family, Jane Cornett, the exwife of one of my nephews, James Victor Cornett.

She was a worker in the Cowan Grade School. She awoke sick, losing blood very badly. They rushed her to Whitesburg Hospital and they checked her and found she had a bad tumor on her intestines and other organs.

They sent her straight on to Lexington by air. I haven’t heard from her recently. I just pray they can help her and keep her from pain. Let her be well again. She has two lovely children, Arlena and Braxton. They both went to be with her.

She also has one granddaughter, Megan. I have loved her for many years. It seems that cancer is running rampant in the world lately. 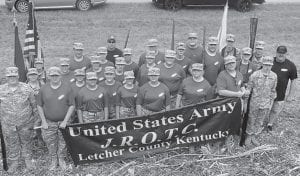 My two sisters came over for a while on Friday evening, Georgia Fay and Judith Gail, and also Georgia’s son, Edward. They stayed a good while. It came some hard rains while they were here. They were afraid it would flood up on Linefork Creek close to Larry Cornett’s home. It gets bad there every time the creek floods. But it didn’t get bad that evening.

I went to see my brother, Arlie recently for a while. He seems to be doing good lately. We talked about the good ole days when we were children on Ingram’s Creek, about times when we would go visit our mom Mary’s parents, George and Judy Campbell.

Arlie can remember so good. We loved to go down there, and in those days they had to have a boat to get across. There was a big, deep hole of water right down in front of their house. Grandpap would watch us and keep us from getting in the water.

That has been 80 years ago, and you can imagine what kind of roads we had — real bad. Everybody walked or rode horses. My dad had an old A-Model car and he would take us sometimes and go to see them.

Oh, what fun we had with all our cousins. Uncle Cooley lived close by and we loved to play with his children. His baby daughter Tannie was a year and a half younger than me. So, we always had good times together. Uncle had lost his wife and a newborn baby. He was a great dad to all his family.

We are having a bad time this week with yellowjackets. They have a nest on our porch in a crack next to the wall of the house and porch. They are bad. I got stung by one before I knew they were there. Randy, my son, is trying to take care of them by using a big Shop Vac. It is doing a pretty good job.

There have been some kind of big bugs with wings flying all around the front yard. They look like giant flies with clear-like wings. The cats have a time trying to catch them. The Mama Cat caught a lot. She ate them. We had good laughs at her doing that. She got real dizzy trying, going around and around.

It is Labor Day, and looks like a storm is about to come with dark clouds hovering over Pine Mountain.

Hoping all is well with our Mountain Eagle readers out in other states.

I guess I did good things recently. I took a long, leisurely bath and washed my hair and got all cleaned up to get out to take this article to be in the paper. It’s been so hot and I haven’t felt too hefty, but maybe getting out will make the day better feeling. I hope so.

We haven’t heard from Jane recently. I want everyone who reads this to pray for her. She is very precious to me and all the family.

My nephew, Mack Allison, is taking treatments for his cancer, and pray for him also. He is a fine man and works hard every day. He never misses when he can make it.

We all have our bad days and our good ones, and we try to make them all good when we can.

I read about Judge Ward being sick and having to be in the hospital over getting the shingles. I’m glad he was feeling better and said for everyone to get a shot for that, so we better listen to him.

Blessings to all until next week.