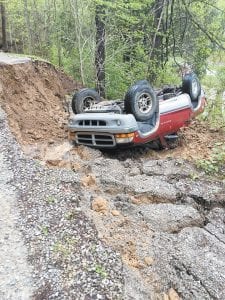 Above, a vehicle belonging to Kathy and Mark Miles of Big Cowan overturned after the road leading to their home was destroyed by a slide during heavy rains over the weekend. Below, Letcher County Judge/Executive Jim Ward finished clearing a culvert that had blocked water and flooded Craft’s Colly Road at Angel Road.

Flash flooding damaged roads and stranded motorists Sunday after more than two inches of rain fell in an hour.

According to the National Weather Service in Jackson, rainfall in Letcher County totaled from 3 to 4 inches from April 18 to April 25, with precipitation stopping early April 24. Kentucky Mesonet, a service of Western Kentucky University, put the amount here at 3.98 inches since Thursday, when the rain began, with rain falling at 2.37 inches per hour at one point.

The Kentucky River at Whitesburg crested 2.75 feet below flood stage at 1 a.m. Monday.

Letcher Judge/Executive Jim Ward said the rain caused mudslides all over the county, and damaged roads. Repair of the Elk Creek Road alone could cost upward of $60,000, Ward said. He said he expects most of the cost to be covered by the Federal Emergency Management Agency.

At least two vehicles were stranded after trying to drive through high water, one at Smoot Creek and the other at Little Cowan. No one was injured. 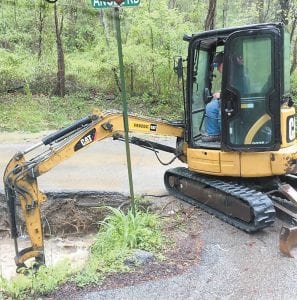