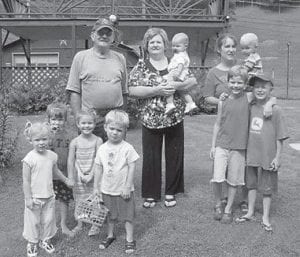 Greetings from the hills and valleys of Eolia and the Eolia Christian Community Outreach.

“For he hath said, I will never leave thee, nor forsake thee.” Hebrews 13:5

That last rainstorm we had was so intense it toppled our neighbors’, Pete and Stephanie’s, carport. Dale and Melissa Burke were crossing Pine Mountain, which was bright and sunny, and pulled off to view our valley as we were getting pummeled with wind and rain. He said it was an awesome sight.

Thanks to community volunteers we now have a lovely stone flower bed and wood fence at the entrance of the Eolia Community Park. We appreciate the men responsible for taking the time and effort to show they care about our park.

Stephanie took a group from Kid’s Time, which included eight children and three adults, for a visit to the farm of Ted Corder. There they saw a horse, sheep, several goats, chickens, a goose, two cats, several hunting dogs and a rabbit. The animals were trained to know when it was feeding time by the rattling of corn in a can, which brought them running to Ted. The kids had a delightful time. Two things Ted said he loved were children and animals. From knowing Ted over the years I can tell you, the feeling is mutual.

I’ll leave you with a thought for the day: “When I come to the end of my rope, God is there to take over.”

Community bulletin board: Bible study each Monday at ECCO at 7 p.m., Kid’s Time each Friday 10- 11:15 a.m. at ECCO, Good News Club each Wednesday. 6:30-7:30 p.m. at the Eolia Mission for children 3 and up, call 633-5015 for transportation, Cumberland River Volunteer Fire Department meets the second Sunday of each month at the Partridge, station, volunteers welcome, Partridge Lions Club meets 6:30 p.m. the first and third Tuesday of each month at the Ovenfork Senior Citizens Center, come and bring a guest.

Also to be lifted up in prayer are those enslaved by drugs and alcohol may they be delivered, the troops in Iraq, the United States and Iraq, our president and the leaders of our country, all the children hurt by war and the ministry of ECCO.