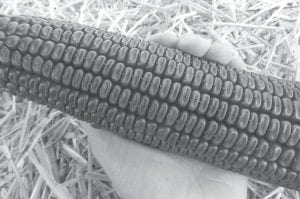 Bloody Butcher Corn is seen in this photo by NPR’s Roxy Todd.

“The heritage seeds central to this ‘agrobiodiversity’ have been passed down through generations of families,” Todd writes. “In many cases, the seeds date back hundreds of years to when Native Americans were cultivating seeds from woodland plants like pawpaws. Other crops like corn traveled to Appalachia from southern Mexico via the Southwest U.S.”

With the future of its rich history in doubt, advocates have stepped in to try to save heirloom crops, Todd writes. One such person is James Veteto, an anthropologist at Western Carolina University and an apple farmer who directs the Southern Seed Legacy Project. For the past 16 years, Veteto has traveled throughout Central and Southern Appalachia, talking with farmers about the heritage fruits and vegetables they grow. But he says, “most of the dedicated seed savers in Appalachia are aging, so there isn’t much time left to help farmers keep cultivating these valuable antique seeds.”

“Preserving a food that is more in demand means preserving farming with heirloom seeds,” Todd writes. “ Veteto says that will require a new generation of farmers taking an interest in these small, niche markets and finding ways to protect the heritage seeds from becoming eclipsed by large-scale, genetically modified and hybrid crops.”