He’ll be at the World Series, but will see little of the action 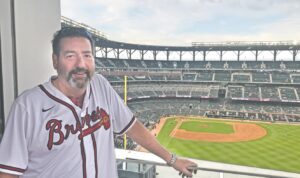 Letcher County native Randy Collins is seen in this Sept. 30 photo taken at Truist Park near Atlanta just as the stadium started to fill with fans eager to see the Atlanta Braves’ division-clinching win over the Philadelphia Phillies. Collins will be back in the stadium Friday for Game Three of the World Series between the Braves and the Houston Astros, but will be too busy working to pay much attention to the action on the field.

When baseball’s World Series reaches Atlanta for Game Three on Friday night, it will mark yet another historic sporting event Randy Collins will attend yet see little of the action that will take place on the field.

The same thing happened to Collins, a Letcher County native, during the 1984 Summer Olympics in Los Angeles, the 1994 NCAA Men’s Final Four Basketball Tournament in Charlotte, North Carolina, the 2005 Super Bowl in Jacksonville, Florida, and the Indianapolis 500 auto race in 2006 and 2007. He attended all of them but was too busy working to keep hungry fans happy than to be able to pay much attention to what was happening on the playing fields, the basketball court, or the racetrack.

Collins, 61, is in his fourth decade working as a food service executive at some of the nation’s largest sporting and entertainment venues. He currently holds the title of restaurant operations manager/special projects manager at Truist Park, the five-year-old home of the National League’s Atlanta Braves, who opened World Series play Tuesday night against the American League’s Houston Astros at Minute Maid Park in Houston. 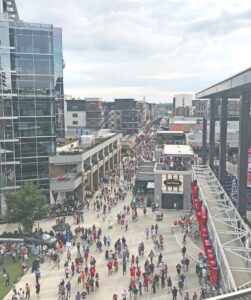 Collins was working at Truist Park when the Braves captured thrilling walk-off wins to take a 2-0 series lead in the National League Championship Series against the powerhouse Los Angeles Dodgers. While tens of thousands of Braves fans chopped, chanted, and cheered the team’s victories, Collins, who counts himself as a Braves fan, had other obligations. He had to make sure those fans — be they dressed in the Braves’ red, white and navy, or in Dodger Blue — were fed and fed well.

Collins, a 1978 graduate of Whitesburg High School, is employed by Delaware North, a Buffalo, New York-based firm which manages food service and other accounts at venues around the world.

Collins is a son of Doris Collins, the longtime lunchroom manager at Whitesburg High School who now lives in Somerset. He remembers spending countless hours in the cafeteria with his mom, even on snow days when she would have to travel to the school to check the temperature of the cafeteria’s coolers.

“I remember playing tag in that kitchen,” he said. “She would have to go up there in the wintertime and check the temperature of the coolers and I’d would go with her.”

Among his many duties at Truist Park is operating several of the stadium’s vast concessions. He also helps oversee food service for season ticket holders and VIPs, and he manages a restaurant, the Terrapin Taproom, located at the ballpark.

Collins’s clients number in the thousands night in and night out at Truist Park, but that “grind,” as he describes it, is nothing he hasn’t conquered since the early 1980s.

Collins’s career in foodservice began just after high school in 1978 when he took a summer job with his brother, Larry, near Chicago. Randy worked in a warehouse for three summers while attending college at Berea and then Eastern Kentucky University. He eventually moved into bartending and then later managing a club in Conneaut Lake State Park near Erie, Pennsylvania, called “The Beach Club,” his first management experience.

His first job out of college was as a warehouse manager at the Gator Bowl in Jacksonville, Florida, in 1981. He was promoted three months later to assistant general manager of the Jacksonville Sports Complex, which included the 82,000-seat Gator Bowl, as well as a minor league baseball park and an indoor venue.

“That’s where I really learned the business,” Collins said.

In 1985, Collins accepted a position with Ogden Allied Leisure Services in Chapel Hill, North Carolina, just before the then-new, 21,000- seat Dean Smith Center opened. His duties included managing the food service at the Dean Smith Center, as well as at UNC-Chapel Hill’s football complex, which he described as often being a logistical “nightmare.”

“These old guys that had been doing it for a long time carried their money around in cigar boxes and socks with change,” Collins said.

He still fondly remembers the response he got while questioning a longtime vendor at the UNC football field.

“I said, ‘How many hot dogs did you make for that?’ And he’d say, ‘Well, we sell them until we run out.’” Collins said smilingly. “I said, ‘Well, when do you run out?’ He said, ‘We always make sure by the middle of the second quarter. That way we can watch the rest of the game.’ I said, ‘So you don’t have any hot dogs by halftime?’ He said, ‘No, no, we’re cleaned up by then.’ It was hard getting them to change their ways.”

While it was a challenge in Chapel Hill, Collins made it work. He realized he had a future in foodservice when he was promoted to general manager there.

“My boss was in Florida,” he said. “When you’re the boss of everybody that’s where you are, then you start realizing how much responsibility you have and then it just gets in your blood. I never did consider doing anything else after that.”

Collins was at the Dean Smith Center when it opened in January 1986. The venue was named “Performance Facility of the Year” in its first year of operation and hosted the likes of the Rolling Stones, Bruce Springsteen, Pink Floyd and Genesis. The first sporting event at the Dean Smith Center was the Duke vs. UNC men’s basketball game, the teams being the number one and two teams in the nation at the time.

“That was a pretty big game to start off with,” he said.

In 1988, Collins was recruited to help open the 24,000-seat Charlotte Coliseum, which was home to the NBA’s Hornets. In doing so, he had to create a food service company from scratch. The company was Leisure Operations, which remains in operation to this day. Collins said establishing Leisure Operations was difficult.

Collins said he continued to learn lessons about management while at the Charlotte Coliseum. He said he would naturally chip in wherever he could, including ordering materials and helping unload delivery trucks. He said his boss at the coliseum told him his days unloading trucks were over. The job, he said, was too demanding and he needed to manage rather than labor.

“I guess I needed to do more thinking and planning,” Collins said.

In October 2005, Collins accepted a job with Crystal Food Service Catering in Indianapolis and began working on feeding fans who would attend the Indianapolis 500 the following May.

A month before the race, his supervisor was injured in a fall, and Collins was forced to step in and take over food service planning for the world’s premier auto race.

“I had to cover the Indy 500 for the first time in my first year because he was out,” Collins said. “There’s five kitchens spread out over two and a half miles. We’ve got 40 golf carts on our fleet for all of our staff. There are 272 suites that you have to manage and get the service. We had Bombardier tower and we had all the other catering. We didn’t do the concessions, but we did all the suites and the catering on the infield.”

The task could have been overwhelming, but Collins said there was no time to be overwhelmed.

“You break it all down. If you try to think about it all, you’d go crazy.”

Like the NBA All-Star Game, or the Bruce Springsteen concert, or the NCAA Final Four, Collins attended the 500 but had little time to stop and witness the history unfolding around him.

Collins spent five years in Indianapolis, working the Indy 500 each year. After another brief stop or two, Collins was hired by Delaware North in early 2016 to assist at the Detroit Tigers’ spring training complex in Lakeland, Florida.

By the end of February 2016, Delaware North had transferred Collins to Atlanta, where he began working the Braves account when the team was still at its former ballpark, Turner Field. He was on hand when team relocated 14 miles north of downtown Atlanta to what is now known as Truist Park in Marietta in 2017.

Collins said opening up Truist Park was difficult but rewarding. He said the Braves’ new park is smaller than Turner Field, but a “nicer” facility. It also offers more options than Turner Field did, including the Terrapin Taproom which he manages, which is the only restaurant in the stadium’s “Battery” development through which fans can enter the ballpark.

Since Collins began working in Atlanta, the Braves have experienced a renaissance, winning four straight National League Eastern Division titles after several years of on-and-off success. The foodservice industry has also continuously changed and evolved thanks to technology.

Collins contrasts food service in the 2020s with that of the early-mid 1980s.

“It’s not the same,” he said. “Back then, everything was cash, there were no credit cards, there was no mobile ordering apps, or anything like that, it was just a lot different with no technology. (But) it’s still serving people and serving them fast.”

While Collins draws little comparison between his career in foodservice and that of his school cafeteria managing mother, he fondly recalls the work ethic she displayed during her 30 years on the job.

“She was very dedicated. I don’t think she missed but one day in 30 years and that was just because her dog died, not because she was sick,” Collins said.

So, is this the year for the Atlanta Braves? Will the Braves defy the odds and win the franchise’s fourth World Series championship and first since 1995? Only time will tell.

One thing, however, is very likely. Because his guests come first, Randy Collins won’t get to see much of the World Series while it’s in Atlanta.