Help at hand for some when elderly relative’s health fails 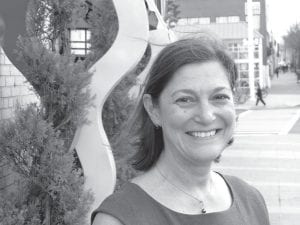 Barbara Newman Mannix is the founder of A Dignified Life in White Plains, N.Y. The company stands in for family members who can’t be as close as they’d like when an elderly relative begins to decline. (AP Photo/Jim Fitzgerald)

Marnie Schwartz was in California, a lawyer raising two toddlers. She was in no position to move across the country to care for her mother, who was living alone in New York and whose health was beginning to decline.

Schwartz’s dilemma was similar to that faced by more and more Americans as the population spreads out, people live longer and giving up a job is out of the question.

“I needed eyes and ears closer to my mother,” said Schwartz, an only child living in Malibu. “I needed someone to handle the medical, the insurance, the financial, stay on top of the daily caregiving, so the emotional strain wouldn’t be overwhelming.”

Those needs have fostered a niche that a variety of enterprises have been filling in recent years. Companies and individuals calling themselves advocates, care managers and advisers are willing to stand in for the family and deal with the maze of responsibilities that comes with the care of an elderly loved one.

With the aging of the baby boom generation, the 78 million Americans born between 1946 and 1964, calls for such businesses are expected to increase over the next 20 years.

Their service doesn’t come cheap and it’s generally not covered by insurance. But some customers have found it’s worth the peace of mind.

Schwartz found her “eyes and ears” when a childhood friend told her about A Dignifi ed Life, a small company in White Plains, N.Y., that specializes in elder care.

“ I don’t know what I would have done without them,” Schwartz said. “They knew where to go with all these questions I had that would have taken me 500 phone calls. They deciphered what the doctors were saying. They got a ramp built at the house. They dealt with the plumber. They remembered everything, and they did it in a really human, caring way.

“In about a year and a half, as my mother’s situation got worse, they became part of our daily life,” Schwartz said. And in October, as her mother’s health failed, “they told me it was time to get on a plane.” She was at her mother’s deathbed, she said, because A Dignified Life knew when to call.

Barbara Newman Mannix, who runs the company, said “experience and empathy” are required to do the job well. She vets, hires and monitors in-home caregivers, attorneys, nursing homes and more, guides a family through the financial tangles and makes sure an elderly person’s wishes are respected. She can help arrange the sale of a house and pre-plan a funeral.

For an initial, $625 fourhour consultation, her company will evaluate a family’s needs and come up with an “action plan.” The family can then hire the company to implement the plan on an hourly or retainer basis.

Mannix started the company after navigating the maze during her husband’s fatal illness.

“You’re suddenly in crisis and the normal reaction is, ‘What do I do, where do I go, who do I call first?’” she said. “People are lost. But we tell them there is a way to cope, there is crisis management, there are people that will help you who do what they do all day every day.”

She said many people just don’t have the personality for dealing with doctors and caregivers and insurance companies.

“It’s time, it’s energy, it’s stress, it’s consternation among members of the family,” she said. “There’s emotional baggage, and if you have children yourself you’re being pulled in both directions.”

“Everybody wants to stay home,” Rappaport said. “Now we do what we can to make it possible for people to stay in their homes.”

Most of her company’s staffers are nurses.

“When we’re hired, we go in and count the pills, check the food in the refrigerator, we talk to the doctors,” she said. “We get a complete picture and we write up a report in lay language. The family knows what we’ll do and what it will cost right up front.”

The services can get very specific.

Jullie Gray, incoming president of the National Association of Geriatric Care Managers, said membership is now near 2,000, up from fewer than 1,600 a decade ago.

Rappaport said the average fee for her clients is between $1,500 and $2,500 a month, not including the in-home caretakers’ pay.

David Cutner, an elder law attorney in Manhattan, said he worries about elderly people exhausting their assets, but added, “People who have a substantial net worth and are not thinking about government benefit programs might well want to hire this type of service.”

A much less comprehensive and less costly alternative is offered by CareFam- ily, which prescreens in-home caregivers and matches them to customers over the Internet. Last week, the company announced a variety of online tools through which a family can remotely monitor a caregiver’s attendance, provide reminders about medications and appointments and exchange care plans and notes via email, texting or phone.

The service would be included in the average $15 an hour fee paid for the caregiver, said CareFamily CEO Tom Knox. He said it can “cut costs while ensuring that the elderly can be well taken care of — without the need to uproot seniors and disrupt families.”

Yale Hauptman, an elder law attorney in Livingston, N.J., said many different services are available. His office is often called in by advocates who discover that an elderly person needs a will or power of attorney or a trust.

“We work with people who just do health insurance, cut through red tape, deal with Medicaid,” he said. “We work with daily money managers, who make sure the bills get paid. We work with geriatric care managers on the medical side.

“The type of work these people do is absolutely essential. It’s a combination of families living farther apart and the fact we’re living longer.”

Leslie Riley of Cornwallon Hudson, N.Y., said that when her sister- in- law began having mental and physical problems, relatives hired A Dignified Life, even though some lived nearby.

“We had no idea where to start,” she said. “Barbara came in and helped us focus on what needed to be done. How to work with the doctors in the hospital. We needed to get power of attorney … .”

“She had a checklist for everything,” Riley said. “I would call her lovingly effi cient.”