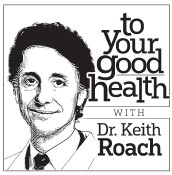 DEAR DR. ROACH: I need your help to get my husband to stop smoking.

We have been together for 27 years. He has smoked cigarettes daily for at least 30-35 years. Recently, he had an attack where he couldn’t breathe, and we took him to the clinic, where they did a breathing test. My 15-year-old son and I watched as my husband agonized to get through the test. They gave him an albuterol machine, prescribed Advair and sent him on his way.

His father also smoked for many years, and now is on oxygen for COPD — he is miserable every day. My husband quit smoking about two years ago using Chantix, but he started smoking again shortly after that. I do not want to watch him suffer like his father. I don’t understand how he sees what his father is going through and still continues down that road. I know it is not too late for him to stop, even though I am pretty sure he has already done some serious damage to his body.

ANSWER: Quitting smoking is perhaps the most difficult recommendation to follow. There are some definite red flags in your husband’s case as you have described it, but some reason to hope as well.

The fact that your husband can see the effects of smoking on his father but has not successfully quit is worrisome. On the other hand, quitting now will greatly slow down damage to his lungs. Similarly, although he restarted quickly after quitting, he was able to quit. He needs to know that most people who quit successfully have tried several times to quit in the past and went back. It’s worth trying again, and he knows that he is able to quit.

Varenicline (Chantix), bupropion ( Zyban and Wellbutrin) and nicotine replacement therapies definitely are helpful for most people in quitting. I am sure his doctor will be happy to partner with you, his family, in helping him quit.

The American Lung Association, Centers for Disease Control and Prevention, Health Canada and the American Heart Association all have helpful information for people trying to quit as well.

DEAR DR. ROACH: After two years of seeing several doctors and being misdiagnosed and treated with wrong medications, my 27-year-old daughter has been diagnosed with psoriatic arthritis. Her joint pain has been constant. What kind of long-term damage has been done during this time? — A.F.

ANSWER: Psoriasis is a common inflammatory skin condition, with wellknown plaques — raised red patches with silvery scales or flaked skin — most commonly seen over the elbows, knees or on the back. Only a minority of people with psoriasis will ever develop psoriatic arthritis, but you have to have psoriasis to get psoriatic arthritis. Sometimes, the arthritis shows up before the skin lesions, making the diagnosis difficult. ©2017 North America Synd.