Helping those from home 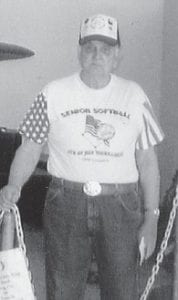 I’ve started getting mail and phone calls from people of Letcher County about the stories I write. I love it. They are people from my grade school and high school days, veterans, and some who knew me in the service.

A couple think I helped them in their basic training days the four years I was at Sampson Air Base in New York, 1950 through 1954.

During those years I took The Mountain Eagle, or got it from somewhere. I wrote a story in the paper that if any parents had sons taking basic training there, that their sons would get in touch with me if they wanted to talk or if I could do anything for any of them.

A lot of them just wanted to talk to someone from home. Most of them did not want to go to Korea. Some thought the Air Force did not give them their choice of school they wanted to go to.

Some wanted me to talk to the airmen in charge of them, as they thought they were not getting a fair shake. Even though I was about the same age as some of those boys, I already had over six years’ service in the military.

One fellow talked to me for a long time and said I might have saved his life by getting him stateside duty.

A couple of men told me that someone helped them out during their basic training days, but they don’t know who he was. I knew some of the boys’ names that I helped then, but not their names today. That was 60 years ago.

I’ve been in touch with many folks from Jenkins and Burdine from the last story that was printed. I found out that a lot of my classmates and friends of long ago are no longer with us.

I think that it would be something if some veterans from Sampson Air Base that I helped out in their time of need would get in touch with The Mountain Eagle, telling what I did for them and about their lives since then.