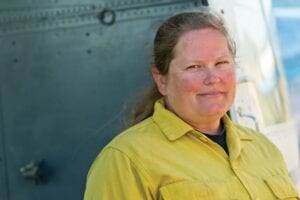 HANNAH THOMPSON-WELCH grew up in Hemphill and graduated from Fleming- Neon High School. She met her husband while fighting forest fires.

As wildfires roared through California scorching 1.8 million acres of forests and killing at least three people, one of the people on the ground was a Letcher County native now working as a forestry technician in North Carolina.

Hannah Thompson-Welch, 41, who grew up in Hemphill and was graduated from Fleming-Neon High School, was among the forestry personnel dispatched to the West Coast last month as the largest forest fires in California’s recorded history tore across the state. The September fires were just a month after lightning strikes ignited hundreds of other fires. Thompson-Welch was assigned to California, her husband Larry Welch to Oregon.

“Door to door, I was there for 17 days,” Thompson-Welch said this week from her assignment that day, running an operations center near her home in North Carolina.

There is a nationwide database of “individual resources,” meaning people trained in certain skills who can be called up in emergencies. They serve 14-day tours, plus travel time on each end of that. 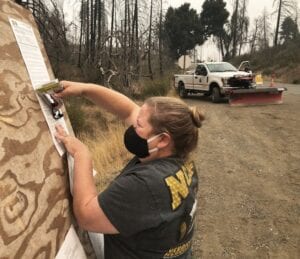 WILDFIRE FIGHTER Hannah Thompson-Welch places burn notices on a bulletin board as part of her job preventing forest fires. A native of Hemphill, she now works in North Carolina and travels to wildfires across the country when needed.

Thompson-Welch said she has gone on about 13 of those emergency deployments, fighting fires, providing hurricane relief, or working in other jobs. She said she’s been to Georgia, Florida, Texas, Idaho, Montana, and Oklahoma, among others, including twice to Oregon and California.

This trip was to work as a public information officer on the fires, a job in keeping with her normal duties as a wildfire mitigation specialist, working with homeowners to reduce the risks of fire around their homes. In the fall of 2016, she was managing helicopters in her home state and Tennessee.

“One of the helicopters I was managing went to the Chimney Top Fire, which was in Gatlinburg,” she said.

The things that make the California fire different from those in the Appalachians is the frequency with which they occur, and the high winds that drive them. Otherwise, Thompson Welch said, there’s not much difference. The Chimney Top Fire in Gatlinburg in 2016 was an example of how quickly blazes and can spread, and how much damage they can cause.

“ Even in southeastern Kentucky, there’s a lot of vegetation right up to homes — houses right out in the woods,” Thompson-Welch said. “It would be to your better benefit if you had a little cleared space around your house.”

That advice is what she regularly gives property owners in her job as a wildfire mitigation specialist, tasked with helping prevent forest fires and property loss in 50 North Carolina counties.

Nationally, only 10 percent of wildland firefighters are women. Thompson-Welch said she never intended to get into the field, but she loved being outdoors and went through the forestry program at Hazard Community and Technical College.

She did an internship as a dispatcher with the Kentucky Division of Forestry, and loved working with maps there. The agency hired her as county ranger in Crittendon and Livingston counties right out of college.

“Kentucky actually sent me to a fire prevention team training in North Carolina, and I just started networking with people,” she said.

After two years in Crittendon and Livingston, she realized that northwestern North Carolina was closer to home than western Kentucky, and she applied for a job there. She has been moved all over the state in the 17 years since then, and now works in Kinston in southeastern North Carolina.

She met her husband on the job. Larry Welch works as a forest fire equipment operator, and was sent to Oregon last month as an aircraft base radio operator.

Thompson-Welch’s mother, Gwen Thompson of Hemphill, said she worries about her daughter fighting wildfires, but she’s gotten used to it.

“I do, but it’s what she loves,” Thompson said. “You have to turn them loose and let them do what they want to do.”

Thompson-Welch said she would like to move back to southeastern Kentucky, but the jobs and pay just aren’t here, and she enjoys fighting wildfires.

“I got bit by the bug, and now it’s the favorite thing I do,” she said.