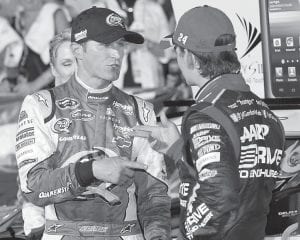 Teammate Jeff Gordon (right) congratulated Kasey Kahne Sunday after Kahne got his first win for Hendrick Motorsports, an organization which has been unstoppable of late in NASCAR’s Sprint Cup division. (AP)

Rick Hendrick says he made a mistake last year, something the owner’s teams haven’t done much lately.

Hendrick acknowledged he added pressure to his programs when he spoke of win No. 200 so soon after Jimmie Johnson collected the 199th victory at Kansas last October. Then came the lost chances and missed opportunities that stung Hendrick’s four teams until Darlington Raceway earlier this month, when Johnson earned the milestone win.

Since then, the Hendrick cars have been unstoppable. Johnson won the NASCAR All-Star race at Charlotte Motor Speedway last week before Kasey Kahne won his first race with Hendrick in Sunday night’s Coca-Cola 600.

Hendrick is working on a new goal now: having all four of his cars in NASCAR’s championship chase. Don’t bet against him with the kind of run they’re on heading into the second half of NASCAR’s season.

Kahne led all four Hendrick teams in the top 11. Dale Earnhardt Jr. was sixth, Jeff Gordon seventh and Johnson 11th. With 14 races left before the chase, Earnhardt in fourth and five-time champion Johnson in fifth look solidly in the top 10. Kahne moved up to 15th in points but more importantly earned a victory that could help him snatch one of the two wild-card spots in NASCAR’s 12-driver playoffs.

The team needing the most help is Gordon’s. The four-time champion is stuck without a win in 22nd. His seventh-place finish at Charlotte was just his third top 10 of the year.

Hendrick said Gordon and Kahne “had just rotten luck” the early part of the season.

Kahne closed out his pre- Hendrick career with a victory at Phoenix last November and figured it wouldn’t take long to find a winning grove. Instead, Kahne didn’t finish better than 14th in his first six races. An accident took him out of Daytona while engine problems left him 38th at Martinsville.

“I hadn’t blown an engine at Martinsville in 20 years,” Hendrick said.

Kahne and Francis worked harder, maybe too hard, to turn things around. Hendrick and the other teams counseled the new guys to keep calm. Things turned around at Texas with a seventhplace finish, starting a run of five straight top 10s leading to the Coca-Cola 600.

Kahne had too much power in NASCAR’s longest race. He took over the lead for good on lap 357 and finished about five seconds ahead of second-place Denny Hamlin. Kyle Busch was third, points leader Greg Biffle fourth and Brad Keselowski fifth.

The race was a tidy 3 hours and 51 minutes, the quickest in Coca- Cola 600 history and nearly five minutes faster than the old record at the track.

Busch won four races running for Hendrick Motorsports from 2004 through 2007 and understands the pressure that comes from changing teams and proving to your new employers they made the right choice.

“If there’s anybody else to beat us, Kasey deserves it,” Busch said. “Pressure is off at Hendrick Motorsports. Might be tougher to get out there and rattle off some good finishes.”

Now Kahne is adding to the growing legacy of one of NASCAR’s greatest programs.

“When Jimmie won it at Darlington, I was excited. I was happy. I was just glad to be in that picture, to be part of Hendrick Motorsports,” Kahne said.

While Johnson was a fitting champion to win the 200th, Kahne wondered when he’d contribute.

“… We finally put it together,” Kahne said.

Hendrick expects all his teams to keep running this way through the chase.