Her apology is not enough 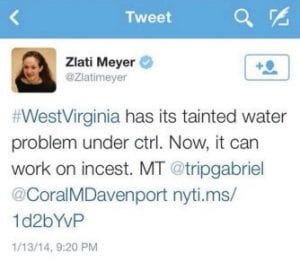 So it’s perfectly OK to say vile stereotypical remarks about your fellow human beings as long as those you are making fun of are from Appalachia?

That’s the only lesson we can draw from a Detroit newspaper’s refusal to suspend, much less fire, a reporter who offended the entire central Appalachian region when she “Tweeted” that West Virginia residents should work on the

“incest” problem now that a toxic chemical spill that left some 300,000 residents without water is under control.

The decision by Detroit Free Press editor and publisher Paul Anger to let reporter and self-described “humorist” Zlati Meyer off with a tepid apology (“I can’t apologize enough,” she said) — and the resulting lack of outrage in the national media — is summed up best by U.S.-born photographer Jerry Nelson, who now makes his home in South America. Writing on his blog JourneyAmerica, Nelson notes the offending remark by Meyer comes on the heels of the highlypublicized firing of Justine Sacco, a public relations executive for the digital giant InterActive Corp. (Match.com, Dictionary.com) who was fired for publishing the following comment on Twitter: “Going to Africa. Hope I don’t get AIDS. Just kidding. I’m white!”

Comparing Sacco’s comment with the Tweet posted by Meyer, Nelson notes: “Just as the furor over the Tweet sent out by Justine Sacco is dying down, another twenty-something comes along and Tweets something as moronic as Sacco, whose Tweet got her immediately canned. Having swung for the fence and missed, Sacco is taking time off in the dugout to watch the game. Up to bat now is the equally brain dead Zlati Meyer of The Detroit Free Press.

“Her Tweet, following the toxic chemical spill in West Virginia, was about as lame and humorless as Sacco’s was. The response was — underwhelming. Other than a few dozen Tweets, there’s been no broad public backlash against Meyer as there was against Sacco. Apparently it’s seen by society as anathema to make jokes about AIDS victims in South Africa, but it’s perfectly OK to do the same about individuals and families in West Virginia. Can someone say double standard?”

In addition to the firing of Sacco, we can think of a few more Tweets or comments that resulted in the firings of other journalists and media personalities. Among them:

• In December 2013, cable news channel MSNBC forced the resignation of anchor Martin Bashir after he called former Alaska governor Sarah Palin a “world class idiot” after Palin proclaimed that borrowing money for China is the same as slavery. Bashir also said Palin should be forced to eat human excrement for showing insensitivity to the issue of slavery.

• In April 2013, a gay newsman in Minneapolis, Minnesota was fired from KSTP-TV after a co-worker forgot to delete a line about “big HOMO dads” he had jokingly added to a story about a gay couple attending the White House Easter Egg Hunt.

• In December 2012, a black television meteorologist in Shreveport, Louisiana was fired from her job with the ABC affiliate there for politely responding to two Facebook posts about her hair that she considered racist.

• During the presidential campaign of 2012, top Yahoo.com reporter David Challan was fired after being caught on microphone saying Republican candidate Mitt Romney and his wife, Ann, were “happy to have a party with black people drowning” as the Republican National Convention was being held at the same time Hurricane Isaac was threatening the Louisiana coast.

Are the Tweets by the two fired reporters and the comment by MSNBC’s Bashir any worse than what Zlati Meyer wrote about West Virginia? Why are the two reporters without their former jobs while Meyer is allowed to keep hers? Is it simply OK to say whatever you want to about those of us who call central Appalachia home?