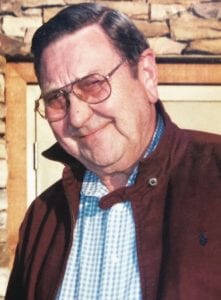 Funeral services for Herbert Clay Caudill, 88, of Whitesburg, were scheduled for 2 p.m. Wednesday at the First Baptist Church in Whitesburg.

Caudill was known to many Letcher County residents for his many years of operating Caudill Lumber Company at Ermine, a business his father started. He died December 17 at the Letcher Rehab Center after a short illness.

A Letcher County native, Caudill was a son of the late Stephen Caudill and Hattie Combs Caudill. He was also preceded in death by his first wife, Jeane Franklin Caudill; a brother, Steve Caudill Jr.; and a nephew, Greg Amburgey.

Caudill assumed operations of Caudill Lumber after the death of his father, who had operated a sawmill at Ermine for many years before expanding the business into a very successful retail lumber and supply business.

Herb Caudill was married to Sally Fugate Webb. He was a Board Member of Community Trust Bank and the Whitesburg Housing Authority, and a member of the Whitesburg First Baptist Church.

On December 20, 1934, Caudill, then only five years old, wrote a letter to Santa Claus that appeared on the front page of The Mountain Eagle. In the letter, Caudill laments that he is “too small to go to school,” but says he is a “good boy” who minds his mother and helps her and his father work.

“I think I deserve lots of toys, fruits, nuts and a big basketball like you gave me last year,” Caudill tells Santa in the letter.

Funeral services will be held at 2 p.m. tomorrow (Wednesday) at the Whitesburg First Baptist Church. Burial will follow in the Combs Cemetery at Ermine.