Here are the facts about swine flu 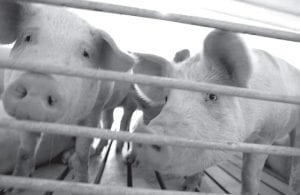 NAME CHANGE RECOMMENDED — U.S. Agriculture Secretary Tom Vilsack and others have suggested a new name for swine flu, arguing that the term now being used implies a problem with pork products. China, Russia and Ukraine are among countries that have banned pork imports from Mexico and parts of the United States affected by swine flu. (AP Photo)

As the new swine flu spreads, people have lots of questions about how it affects their day-to-day life. Here are some answers.

Q: How easy is it to catch this virus?

A: It’s spreading as easily as regular winter flu, which infects millions each year. Early estimates are that 25 percent to 30 percent of family members are getting sick once a relative brings it home.

Q: How dangerous is it?

A: Nobody knows yet. Genetically, it doesn’t share the same traits that made the infamous 1918 pandemic so deadly, nor does it seem as virulent as the bird flu that scientists have tracked for several years. While Mexico reported many deaths, the virus is causing less severe illness in the U.S. In fact, the Centers for Disease Control and Prevention says most cases so far haven’t needed medical attention.

Q: Could I have some immunity?

A: Since it’s a never-before-seen mix of mostly pig but also human and bird viruses, the CDC has cautioned that’s unlikely. But it is a member of the H1N1 family of flu viruses, which circulate widely. Flu specialist John Treanor at the University of Rochester says people born before 1957 spent their childhood repeatedly exposed to H1 viruses. So experts are withholding final judgment on that question.

Q: Is it treatable?

A: Yes, with the standard anti-flu drugs Tamiflu and Relenza. They lessen symptoms if taken within 48 hours of the first symptoms.

Q: Is there a vaccine?

A: No. The government is working to develop one and the earliest shots could roll out would be in the fall, if authorities decide the virus remains enough of a threat to offer those shots. Manufacturers are preparing regular flu shots for the fall, when routine influenza strains will start circulating regardless of swine flu.

Q: Why does CDC stress handwashing?

A: Flu viruses do spread through the air, so cover coughs and sneezes with a tissue or by sneezing into your elbow rather than your hand. But flu also can spread by touching your mouth or nose with unwashed hands. The viruses can live on surfaces such as doorknobs or handrails for a few hours, or be passed by a handshake.

A: No, they’re just an alternative, says Dr. Richard Besser, the CDC’s acting chief. He keeps a bottle in his pocket. The bigger issue is to wash hands well enough to get rid of germs. Sing “Happy Birthday” or “Twinkle, Twinkle, Little Star” to know you’ve scrubbed long enough, he advises.

Q: How long do I have to worry if I just got back from Mexico?

A: The incubation period is two days to seven days, regardless of where you were exposed.

Q: How long should I stay home if I get the flu?

A: Certainly call your doctor about bad symptoms or if you’re at all worried, especially if you have any chronic condition, such as asthma, that makes you more susceptible to any kind of flu. But other than going out for medical care, stay home for seven days or for one day after symptoms end. The CDC also says family members should consider staying home or decreasing their contact with others in case they’re incubating the infections.

Q: Why are so many schools closing?

A: It’s not clear just how much good school closings do in slowing flu’s spread. It doesn’t help much if kids then gather at the mall or a friend’s house or day care. But because children spread all kinds of viruses easily — they don’t wash as well, have close contact in crowded classes, and sometimes are contagious for a few days longer than adults — the CDC has advised schools with cases to consider closing for at least 14 days.

Q: Can pets get sick?

A: Besser says there’s no evidence that this flu affects anyone other than humans.

Q: Can flu spread on imported fruits and vegetables from Mexico?

A: No. It doesn’t spread through any food, including pork.

Q: Is it safe to fly? How about the subway?

Q: Do I need a mask in crowded areas?

A: The CDC hasn’t yet recommended that anyone other than health workers use masks.

Q: Why hasn’t the U.S. closed the border with Mexico?

A: By the time authorities detected the new virus, it already had spread here. That makes closing the border moot, the Obama administration says.

Q: I have a summer trip planned to a state with lots of cases. Should I cancel?

A: Not yet, just stay tuned, Besser advises. Doctors should know much more about this flu by then.

Q: Why did the government quit using the name “swine flu” this past week?

A: Because of concern that people thought they might catch the virus from pigs or pork — which is wrong. It is spread person to person.

Q: How can I get more information?