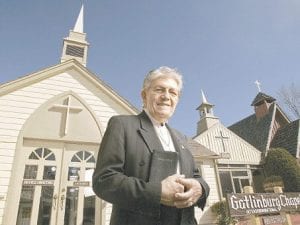 The Reverend Ed Taylor stood outside the Gatlinburg Chapel on January 31 in Ga tlinburg, Tenn., where he has performed ceremonies for 30 years. (AP Photo)

The Rev. Ed Taylor has been marrying tourists in the Smoky Mountains for more than three decades. Now, he’s the one saying “I do” — to retirement.

Taylor, 77, estimates he’s performed about 85,000 marriages in Gatlinburg, where the majesty of the mountains is just a bouquet toss away.

“I won’t know until I get to heaven how many stayed together,” he said by telephone. “But we laid the groundwork for them.”

In Gatlinburg, there is no waiting period or mandatory blood test to get married. Just like Las Vegas, couples have flocked to the town of 4,900 to get married and stayed for their honeymoon.

Feeling impetuous? A wedding license is available for $38.50 (even on Saturday). Then, stroll into a wedding chapel, say the vows and you can be married in a matter of moments. According to the Gatlinburg Chamber of Commerce, 600,000 people come to the Great Smoky Mountains each year to get married or attend a wedding. The town is marketed proudly as “the wedding capital of the South.”

“I’ve done it seven days a week,” Taylor said. “We used to do ‘marrythons’ on Valentine’s Day around the clock. We did as many as 60 in a 24-hour period.”

Taylor, an ordained Baptist minister known affectionately around town as the “Rev. Ed,” has performed weddings for Billy Ray Cyrus (the father of “Hannah Montana” star Miley Cyrus) and country singer Patty Loveless. Country performer Tanya Tucker sang at one of his ceremonies for a band member. He also married Jeff Cease, formerly of the Black Crowes.

“I felt his ceremony was superior to any I’d heard of or used,” said Reynolds, a fellow minister. “I actually memorized the wedding ceremony.”

Taylor was the first in Gatlinburg to make nuptials a business. Before he began presiding for the parades of excited couples, Taylor said tourists had to get married at a local farm supply store by a justice of the peace.

“They’d get there and climb over sacks of feed,” he said.

There are now dozens of wedding chapels in Gatlinburg and neighboring Pigeon Forge, drawing comparisons to Las Vegas, where there are more than 100,000 weddings annually amid a backdrop of casinos, dancing waters and Elvis impersonators. There are about 17,000 marriages annually in Gatlinburg’s Sevier County, which is within a day’s drive of much of the South and parts of the lower Midwest.

“Rev. Ed has made a huge impact on our community,” said Gatlinburg Mayor Mike Werner. “His name and weddings in Gatlinburg are synonymous.”

Taylor’s ceremonies last 20 minutes and cost $150 on up. He reminds couples about the sanctity of marriage “and I close by challenging them to make the worship of God a part of their life.” They are presented a copy of the New Testament before they leave.

“It’s not just walk in, walk out,” Taylor said.

Taylor will be around a little longer (he has 12 scheduled weddings on Valentine’s Day) while he sells his four chapels.

He himself is single right now. How many times has he been married? “Too many.”