Here’s how to cook the perfect turkey

By MICHELE KAYAL
The Associated Press 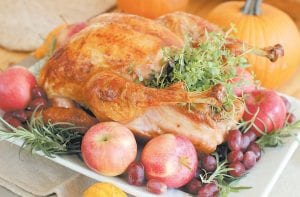 THANKSGIVING TURKEY 101 — Ask a dozen professionals for the best way to roast a Thanksgiving turkey and you’ll get a dozen different ways. So we took the suggestions we liked best and combined them into one recipe. (Associated Press photo)

Some people are all about the stuffing. Some can’t do without the mashed potatoes. And the debate over marshmallows with the sweet potatoes can stoke family feuds spanning decades. But at the end of the day, Thanksgiving is all about the bird. Because face it, the turkey is the centerpiece. And getting it right — delivering a succulent, perfectly browned, magazine-worthy specimen — presents the holiday’s biggest challenge.

To unlock the secrets of roasting a great bird, we asked some of the country’s top chefs and food experts the tough questions: To brine or not to brine? High-heat or slow roast? Basted or not? Then we culled their answers to produce our recipe for the ultimate bird, as well as offer you some take-themor leave-them weird and wonderful tips for your own perfect turkey.

Let’s start at the beginning: A 12- to 14-pound turkey gives you the best chance of cooking success. Anything larger is difficult. That’s because the white and dark meat need to be cooked to different temperatures, and the bigger the bird the more difficult it is to nail that. If you need more than 14 pounds of turkey, our experts suggest roasting two.

Most of our chefs favor fresh, free-range turkeys. “An animal that isn’t caged and is allowed to live a more free life will be a happier animal,” says Brad Deboy, chef de cuisine at Washington’s Blue Duck Tavern. “Happier animals will always taste better.” But if you can’t afford or find a fresh, free-range turkey, don’t despair. “In our testing, we found that fresh didn’t always equal better,” America’s Test Kitchen editor Bridget Lancaster said via email. Frozen turkeys, Lancaster says, may not be subject to the temperature fluctuations that sometimes afflict fresh birds during transit.

Dry brine, wet brine, it doesn’t matter, our experts say, just brine that bird. The typical wet brine submerges the turkey in water containing salt, sugar and aromatics such as sage, rosemary, thyme and black peppercorns. Richard DeShantz, executive chef at Pittsburgh hot spots Meat & Potatoes and Butcher and the Rye, gives his birds a subtle sweetness with a 50-50 mix of apple cider and water. Chef Michael Solomonov, who just released the first cookbook from his Philadelphia restaurant Zahav, creates a Mediterranean profile with allspice, dill seed and black cardamom. Point being, feel free to play with the seasonings.

Wet-brined birds must be patted down, then air-dried for several hours after brining before roasting them. To avoid the mess, chef Vivan Howard of Chef and the Farmer in Kinston, N.C., suggests ditching the water and using a dry brine — a rub of salt, sugar and dried herbs — a day or two before cooking. Dry-brined birds also will have a crispier skin, she says.

Basting is a given, our experts say, but some chefs take it to the extreme. Howard’s secret: soak a triple-layered sheet of cheesecloth in melted butter and drape it over the breast of your roasting turkey. “The cheesecloth slowly releases the butter onto the bird,” she says. “That’s my thing that I do.”

Not ready to wrap your bird like that? Use the juices that collect in the pan and baste the turkey every 20 to 30 minutes, but no more. Opening the oven to baste more often than that will release all the heat from the oven and can significantly delay roasting times.

To promote a crisp, brown skin, many chefs recommend cranking the oven to 425 F during the first or last 30 to 45 minutes of cooking. Just be sure to protect the delicate breast meat. If using high heat at the beginning, start with the bird breast-side down. After 45 minutes, turn the turkey over and continue roasting at 325 F.

If you brown at the end, cook the bird breast-side up at 325 F, DeShantz says, but tent the breast with foil. Remove the foil for the last hour of cooking, then increase the heat to 425 F for the last 30 minutes.

Ignore the pop-up thermometers that come with some turkeys. Instead, use a good instant-read thermometer and test the temperature early and often. Our chefs generally vote to let breast meat reach somewhere between 160 F and 165 F, and to take dark meat to around 180 F. But Harold McGee, food scientist and author of “On Food and Cooking,” says to pull the bird out of the oven when the breast hits 150 degrees and the thigh registers 160 degrees. “Those standard higher temperatures give you standard dry turkey meat,” McGee says. “Lower temperatures mean juicier meat.”

And what’s his trick for protecting the breast? “Take the bird out of the fridge a few hours in advance of cooking,” he says. “Let the legs warm up, but cover the breast with a bag of crushed ice.” Seriously.

Of course, all of these tips call for cooking the turkey to below the 165 F that is considered safe. That’s because roasted meats of all persuasions continue to rise in temperature after they are removed from the oven. And that’s why if you leave it in the oven until it reaches 165 F you’ll end up with an overcooked turkey.

Regardless of how you cook the turkey, our experts say to make sure you let it sit, undisturbed, on a cutting board or platter for at least 30 minutes before carving. This allows the bird to finish cooking more gently and reabsorb all of its juices, producing moist meat. To prevent it from cooling, cover the turkey with foil, then layer several kitchen or bath towels over that.

Dismember the bird. That’s right. DeShantz recommends butchering the turkey raw and cooking its parts separately. “Separating the dark meat from the white and cooking them separately is one of the best ways to nail the temperature difference between properly cooked thighs and breasts,” he said via email. “This technique results in better cooking, better seasoning, easier carving and better gravy.” What would Norman Rockwell say?

Ask a dozen professionals for the best way to roast a Thanksgiving turkey and you’ll get a dozen different ways. So we took the suggestions we liked best and combined them into one recipe that is simple, foolproof and produces a delicious and beautiful bird. Looking for a classic recipe that delivers serious payoff? This is it.

Start to finish: Overnight, plus 3 1/2 hours

In a small bowl, combine the salt, sugar and black pepper. Remove the neck and giblets from the turkey cavity. Use paper towels to pat the turkey dry, inside and out. Rub the salt mixture all over the turkey skin and inside the cavity. Place in a roasting pan and refrigerate, uncovered, for 8 hours or overnight.

Rinse off the turkey, inside and out, then thoroughly dry with paper towels. Rub the butter under the skin of the turkey. Fit a roasting rack into the roasting pan and mist it with cooking spray. Set the turkey, breast side down, on the rack. Stuff the rosemary, sage and thyme into the cavity. Roast for 45 minutes.

Remove the turkey from the oven and lower the temperature to 325 F.

Using 2 pairs of sturdy tongs (or one pair of tongs and a longhandled spoon inserted into the cavity), or washable pot holders, flip the turkey over so that the bird is breast side up. Return to the oven and continue cooking.

Baste the turkey with any drippings that collect in the pan every 20 to 30 minutes, or until the turkey is cooked to 160 F at the breast and 175 F at the thigh, about 1 1/2 hours. Transfer the turkey to a carving board or serving platter and cover first with a layer of foil, then with several layers of clean kitchen towels. Allow the turkey to rest for 30 minutes before carving and serving. If desired, use the drippings to make pan gravy.