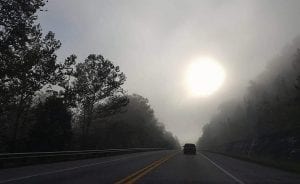 “Driving two hours to Whitesburg every year was not something I planned on becoming a tradition,” Jonathan Butler from Clay County, Kentucky recalled just the other day. “But now that Heritage is gone, I look back every September on how for one weekend a small town opened its arms to those who didn’t quite look like we belonged there — tattoos, dragging trucks, just a completely different atmosphere. It was unlike anything we ever had, and likely something that will never exist again.” The undated photo above was taken by Butler and Robin Carr at sunrise on the Whitesburg bypass during a visit to one of the Heritage 2K shows, which began in 2003 and ended in 2017. The shows were organized by L.M. “Mike” Caudill and his son, Lee Michael Caudill.