‘Hero Wall’ unveiled as tribute to organ donors and recipients; is located in county courthouse 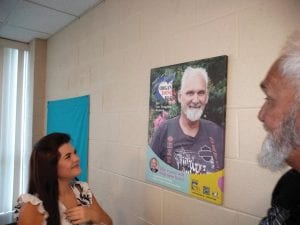 Above, Brooklyn Dotson, who received a liver transplant from a 10-year-old boy when she was just 18 months old, looks on as Cody Bill Rose of Haymond, also a liver recipient, unveils his portrait in the Letcher Circuit Clerk’s office. Below, Letcher Circuit Clerk Mike Watts stands under a recently unveiled portrait of Jacob Lucas of Thornton, an organ donor featured on the new Hero Wall in Watts’s office.

Clerk Mike Watts unveiled the first of the pictures on Monday, telling about 50 people gathered in the upstairs hallway of the courthouse that he had promised to recognize organ donors during his campaign, and improve the county’s standing from last in the state in the percentage of organ donors.

With the help of Brooklyn Dotson of Whitesburg, who received a liver when she was just 18 months old, Watts said his office registered 89 new donors at the Mountain Heritage Festival on Friday, and another 50 on Saturday. He said 19 percent of the adults in the county are now registered organ donors, and the county has climbed out of last place.

He said he started with the idea of a wall for donors, and then decided it there would be no better way to recognize donors than to have pictures of organ recipients as well. Federal privacy laws prevented him from finding out who those recipients were unless they told him, and several have come forward since he started the effort. He said he nearly choked up talking with the family of donor Jacob Lucas of Thornton while on a radio show, and he told the story over at a campaign event in Haymond. 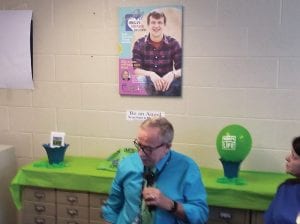 “When I sat down, the M.C. of Haymond Days was kind of emotional, and he said, ‘What Mike said is right. I got a liver transplant,’” Watts said.