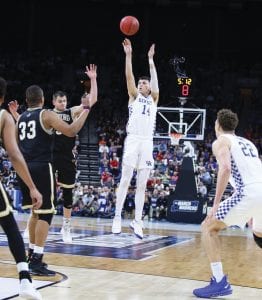 “He is doing a great job. A lot of guys don’t spend time working on foul shooting like they should,” said Macy, the starting point guard on UK’s 1978 national championship team. “I don’t know how much time he spends, but he’s got it down with what he’s doing. He gets the ball, shoots it and doesn’t think about it.”

Whatever Herro does, it’s working just like it did for Macy when he always followed his ritual of wiping his hands on his socks before shooting.

“I think the routine puts you in a trance and you block out everything and do not worry about the crowd,” Macy said. “When you put in shots and see results, you get more confidence. You want to be the one fouled because you have confidence to help your teammates. The more you make, the more confidence you get.” 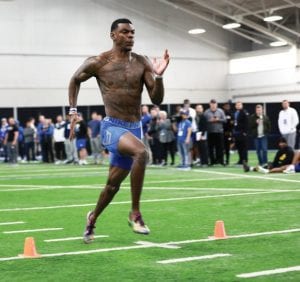 Herro is shooting 94.3 percent (83 of 88) at the foul line and made two in the final seconds of Saturday’s NCAA Tournament win over Wofford to put UK into the Sweet Sixteen. He had tape on his wrist with the number 25 on it to remind him to win for PJ Washington, who was out with a knee injury.

It’s no fluke that Herro has his name in that elite company. The Kentucky freshman says he often works on his shooting three times a day. Even if anyone told him to consider getting more rest, he wouldn’t.

“You just step up there knowing that it is going to go in once you see a few drop. You never really think about missing at the line,” Herro said. “You just have to believe you will make them and then you will.”

Macy said that’s the only attitude a player can have.

“If I missed one early in a game, I didn’t miss again. I would get upset with myself and focus even more,” Macy said. “I didn’t have many games where I missed more than one free throw. It’s 85 percent mental. The rest is about your routine.”

Postseason pressure does not change the free throw routine, or accuracy. Herro has been in his best in the most pressurized situations just like Macy always was at the foul line.

“You are so focused on the game that you don’t worry about a streak of how many shots you’ve made,” Macy said. “You want to be the one to shoot the big foul shots. Most of my problems came in blowouts. In the postseason, you are not worried about individual goals. You are worried about the team. Some guys might worry more than others but it’s pretty obvious pressure won’t bother him.”

Macy has not had a chance to meet Herro. The Kentucky freshman said he was not really sure who Macy even was until recently even though he was on the verge of breaking Macy’s record.

“It has been fun to watch his streak and I hope he keeps it going,” Macy said. “He doesn’t even get a lot of rim (with his shot). It’s all net. That’s how good he is.”

”I went up and was in his house this summer because I wanted him to tell me some five-out stuff, some back-door stuff, some shooting — because I thought we had a skilled team and I wanted to learn some different stuff, and we ended up spending an afternoon together with he and his assistant,” Calipari said.

Byrd got his team into the NCAA Tournament again this year and has over 800 wins in his coaching career.

“He’s a Hall of Fame coach. He’s 800 wins, he’s ridiculous. But also for the game of basketball, he’s been on the rules committee, he has spent time, and to be on those committees, it’s like time-consuming. He was an athletic director on the committees coaching basketball. He finally gave up the AD stuff, he just wants to coach,” Calipari said. “He’s a coach’s coach is what he is, and great at what he does, great for his kids, has an unbelievable — he still has a fight and fire, but his kids love him.”

Byrd said as many as 10 coaches from different levels have come to pick his brain in the last seven or eight years.

“We had one that came in and wanted to know how we defended, and I thought, this is the first time anybody has asked me that. You can come back any time you want to if you think we defend good. Everybody else wants to talk offense,” Byrd said. “But it was great talking to him (Calipari). It’s always fun.”

“I will never worry with Cal about us having enough ability to win a national championship,” Harden, who played for Joe Hall and Eddie Sutton, said. “I think we have probably had the talent every year but one that he has been here.

“He is one of the best coaches you could have and how he does it is amazing. When these kids announce now they are coming to Kentucky, fans are tapped in. We take it hard when we do not get a top kid.”

Harden says when he played 30 years ago, players didn’t face the pressure to produce immediately and show they were a “world-class recruit” like players do now. Harden says it’s none of his business how Calipari recruits, either.

“He’s always delivered. There are some consequences with the fan base with one and done players, but he wins. That’s what matters,” Harden said. “Fans were connecting with players back in my time in the way players don’t connect with fans now. That’s just being honest. That’s not anti-Cal or anti-UK. That’s just a fan from the past pointing out how things have changed but Cal makes it work.

“He seems to also just have a knack for getting them to play their best at just the right time and hopefully that’s what they are doing again right now.”

No one may have helped himself more than cornerback Chris Westry, who was not invited to the NFL combine. He had the fastest 40-yard dash time of 4.31 seconds and his 38-inch vertical jump was also the day’s best.

“I just want to show what I can do at the next level,” Westry said.

“When you have a guy with that size who can run that time, the NFL teams are going to notice,” former UK running back Anthony White said.

Cornerback Lonnie Johnson ran a 4.39 40 and weighed in at 210 pounds on his 6-2 frame. That was much better than the 4.52 he turned in at the NFL Combine in Indianapolis. He’s now being listed as a second round pick in most mock drafts but at least eight teams have shown significant interest in him during interviews.

Kentucky tight end C.J. Conrad didn’t get to participate in the NFL combine after tests revealed concerns about his heart. He’s now been cleared and participated in pass catching drills only at UK’s Pro Day. However, he will have his own workout for NFL scouts next week at Kentucky.

Abbey Cheek never let pursuing the all-time home run record at Kentucky become a distraction for her before she finally hit the record-breaking homer last week against Missouri.

Cheek hit her 49th career home run Saturday to break the school record set in 2012 by Brittany Cervantes, who is now a graduate assistant coach at UK, and then blasted her 50th on Sunday. She now has both the home run and RBI career records at UK.

“I just kept focused on what my job is and that is to drive in runs,” Cheek, a senior third baseman, said. “Buying into the process and just stating within myself and knowing the big hits will come as all I tried to do.

“I didn’t really think about it but I do think it is really cool to have records that you have a chance to break. To have Brittany here, it’s really cool for her to be here and see it.”

“I always heard good things about her and how good a player she was,” Cheek said. “She has been a big help to me this year and just having her here is a really good for our team in general. She’s been there, done that. She knows how to play the game and to break her record with her here to see it just makes it even more special.”

Kentucky got swept at home by Missouri last weekend after getting off to a 6-0 start in SEC play. However, Cheek remains optimistic about what lies ahead for her team.

“I think that we have a lot of chemistry and potential to go really far this year. We are just going to keep working on the little things that we can control and then good things will happen for us.

Quote of the Week: “I don’t really see it as pressure. I played in some pretty big games throughout any whole life. McDonald’s game was pretty big, state championships. NCAA Tournament doesn’t compare like a state championship, but I’ve been preparing for this my whole life, and it’s been a great time being a part of this,” Kentucky freshman Immanuel Quickley on playing in his first NCAA Tournament.

Quote of the Week 2: “I was intrigued by the way people talked bout him. He’s one of the most exciting players in college basketball. He has great court vision. He’s somebody that’s fun to root for and he is going to make some NBA really happy. It’s made me realize that basketball recruiting can still be wrong about some real stars,” Bleacher Report writer Mirin Fader on Murray State point guard Ja Morant, who had a tripledouble in the NCAA Tournament last week.

Quote of the Week 3: “It’s a dream come true because you always want to play against higher-ranked schools, and this is up there. Kentucky is a great team, great program, great players and great coaching staff. I used to grow up watching them and just being out there — not being out there, but just watching them and dreaming about going to Kentucky. This is truly a dream come true,” Abilene Christian’s Jaylen Franklin on getting to play UK in the NCAA Tournament.