He’s been ‘speaking pieces’ on local radio for 27 years 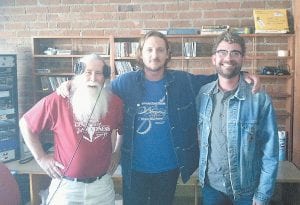 Almost anyone who is a regular listener of WMMT 88.7, the community public radio station based out of Appalshop in downtown Whitesburg, has had what might be termed “Wiley moments.” These are times when as you listen to veteran broadcaster Jim “Wiley Quixote” Webb’s long-running and popular program “Ridin’ Around Listenin’ to the Radio,” you become just as excited about hearing Wiley’s interludes and commentary as you do the music he plays. You find yourself kind of wishing that the Byrds or Goose Creek Symphony — as much as you may enjoy them — would hurry and wrap it up so we can hear Wiley speak.

“Wiley Quixote” was born in Tug Valley, W.Va. in 1977 in the aftermath of the great Appalachian flood of that spring. Webb, of the Mayking Webbs, had helped, using the Presbyterian church there as headquarters, to get food and supplies into the hands of families who had been devastated by the flooding. One of Webb’s fellow organizers had a cousin living in Beckley, W.Va., at the time. Because of the flooding, the road that runs south from Beckley was the only accessible road into the Tug Valley area, so Webb’s friend sent word to his cousin to fill up his truck with as much food as he could handle and make his way to Williamson, W. Va.

Their mission grew. Eventually other entities got behind the work of Webb and friends and were sending big supply trucks full of goods to the flood-ravaged region.

“We had one truck come that had nothing but cornflakes and toilet paper in it,” Webb recalls. “This was a good thing because people forget that you still have other needs besides food in times like that.”

That same year, Webb and his associates decided to take to task the major players in West Virginia politics, whom they felt were complicit to the then-unregulated strip mining they felt was a major player in the flood. In order to do so, Webb and company decided to give a reboot to a defunct 1930’s-era newspaper from the area named The Sandy New Era. Webb’s duties at the paper included penning a political satire column called, “Ridin’ Around Listenin’ to the Radio,” a reference to longtime friend Jughead’s default response when Webb would ask him what he was doing.

“Ridin’ Around Listenin’ to the Radio” offered a weekly critique of the goings-on of different public figures using aliases that were thinly-veiled references to their real names: West Virginia Governor turned Senator Jay Rockefeller was Rocky Pharoah; Arch Moore, Rockefeller’s predecessor (and successor) as West Virginia Governor was Arch Enema; and Ronald Reagan was Ronnie Ray-gun, just to name a few.

Webb would soon create an alias of his own.

After reading an article by West Virginia’s director of Environmental Protection entitled “The Nadir of Vandalism” about how outraged the author was that vandals would destroy a public bathroom at a state park, Webb became furious and was spurred to action.

“It made me angry because to me ‘the Nadir of Vandalism’ was the destruction of our mountains, not some bathroom,” said Webb.

Webb’s response to the “Nadir of Vandalism” article would come in the next edition of the Sandy New Era, only this time it wasn’t Webb signing off.

Within Webb’s circle he had been using the name Wiley Quixote, a play on the cartoon character’s name Wile E. Coyote and the man from La Mancha, Don Quixote. Webb created this character for himself that would talk to donkeys and use his pen instead of the sword. “An environmentally aware mountain character with a sharp wit, and a penchant for puns,” his Wikipedia page reads. The response to “the Nadir of Vandalism” was the first official appearance of Wiley Quixote in print.

Wiley left Tug Valley in 1981 and headed to northern Michigan to work in the canoe business. While he no longer did his column weekly, he still contributed to the Sandy New Era.

In 1984, Webb found himself back home in Letcher County. After stints as an English professor at the community college in Williamson, W.Va., and as a traveling poet and playwright whose work had taken him as far as New York, Webb returned home to the mountains to care for his ailing father, Watson Webb, who had served as superintendent of Letcher Schools in the late 1930’s and early 1940’s

Wiley, ever the free spirit, says that while his adventures out of the mountains ended “10 or 15-years earlier than I would’ve liked,” says he has no regrets because he knew he wanted to end up back home anyway.

Lucky for Wiley, upon returning home he would find a way to keep his life’s work going, only this time the medium would be different.

In late 1985, Wiley approached WMMT, a burgeoning community public radio station established as an outreach of Appalshop, the media and arts center founded in Whitesburg in 1969 through the work of Yale University graduate students (including Whitesburg architect Bill Richardson) as an economic development project of Lyndon Johnson’s “War on Poverty” efforts. Wiley would volunteer his services as a DJ, and in December of 1985 “Ridin’ Around Listenin’ to the Radio” debuted.

Showcasing Wiley’s unique brand of self-deprecating humor and penchant for clever puns and word play (he playfully touts WMMT as “with out a doubt, the greatest little community public radio station in the whole wide W-H-I-R-L-E-D) all while playing music from the likes of Bob Dylan (Wiley’s personal favorite), Goose Creek Symphony (“they never got as big as they deserved to be,” Wiley says) and many others, “Ridin’ Around Listenin’ to the Radio” is now in its 27th year. It airs from 3 until 6 p.m. every Wednesday..

Of all the segments that make Wiley’s show unique, and popular, “Speak Your Pieces” might be the best.

“Speak your Piece” has been a regular feature of The Mountain Eagle since the early 1980’s, predating popular anonymous Internet discussion forums like Topix. The column gives people an opportunity to say what they want to say anonymously, with this caveat: no names can be mentioned, unless of course, you’re talking about a public official.

The comments printed every week in the Eagle range from well-informed critiques of state, county, and city politics to ill-fated attempts at sparking up romance with “the man in the blue truck at BP” all the way to jealous husbands anonymously threatening those men whom they suspect their wives are seeing.

Suffice it to say, in print, “Speak Your Piece” is already wildly entertaining. This is especially true when the segment is read through the lens of Wiley’s charisma and poetic instincts every Wednesday around 5 o’clock during his weekly segment : “Speak Your Pieces with Wiley Quixote” where Wiley gives the printed column the spoken-word treatment as only a poet of his skill and stature can.

Set to an easy-listening type soundtrack the likes of which you would probably hear in a department store elevator, an announcer provides a fitting introduction: “And now it is time to visit with your neighbors, friends, and total strangers in the pages of the Letcher County Mountain Eagle’s ‘Speak Your Piece’ column as they unburden their hearts, minds, and personal baggage, in their never ending quest for romantic, economic, political, social, judicial, Republicrat, Demo-can, Libertarian nirvana, justice, and/or vengeance.”

It’s the perfect set-up for the segment. From there, Wiley transports you to his world (or, W-H-I-R-L-E-D for the initiated), where even his reading of the most trite rants give them a fresh, poetic quality — not an easy task when you have to deal with comments like, “The state of Kentucky sucks, especially the court systems down there.”

After volunteering in WMMT’s infancy, Wiley eventually parlayed his work into a full-time program director post at the station. Just this year, Wiley retired from that post, but still holds sacred that 3-6 p.m. time slot every Wednesday. And he promises he isn’t going anywhere.

Let’s hope that’s true, because we don’t have too many folks that “reads them as they sees them” these days.

Contributing writer Tom Sexton is a graduate of Morehead State University, where he majored in journalism. He serves as an elected member of the Whitesburg City Council.