He’s known as ‘Choo Choo Man’ and he loves it 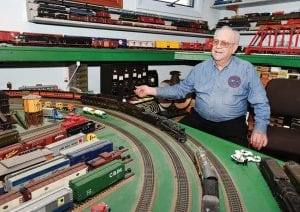 Eddie James runs some of his model railroad trains inside his home in Owensboro, Ky. Authentic antique railway lanterns hang from the kitchen ceiling beside small wind chimes cut in locomotive shapes. (Alan Warren/ The Messenger- Inquirer via AP)

When Eddie James gives directions to his home on Bolivar Street in Owensboro, he tells people to look for a green house with a locomotive hanging from a post in the front yard.

Once visitors step inside, they see a collection of collections: Dolls, Volkswagen Beetles and glassware jump out at you immediately.

But they pale in comparison to James’s first love.

This is just a taste of what’s in store. A narrow set of stairs to the right leads to the mother lode.

In an upstairs room, miniature locomotives, cars and cabooses line shelves upon shelves. A large homemade platform supports a tiny railway yard with several tracks. James flips switches on a large vertical power board and the scene sputters to life.

At one point in the demonstration, he placed a red suspension bridge between two tracks, finishing the loop. On the opposite end of the room, a model train roared to life and chugged around the room’s perimeter.

“The main line of the Kentucky Division of the Illinois Central went right past our house,” he said. “When I was born, the first sound I ever heard was probably a locomotive.”

For Christmas in 1939, he got his first toy train. Sadly, he doesn’t have it anymore. His dad talked him into selling it after World War II.

However, his wife, Betty James, still has the first train ever given to her. It sits in a favored spot in her husband’s collection. Betty James’s dad bought her a Lionel set for Christmas when she was a few months old.

She’s not into trains. Instead, she collects dolls, but her husband’s toy trains don’t bother her at all.

Eddie James has no idea how many model train sets he owns or how much he has invested. “I don’t want to know.”

He builds many of his own locomotives and cars. A simple box car takes about an hour.

“A locomotive takes longer,” he said.

Eddie James held a tiny caboose in his hand and pointed out all the details. It took 26 hours to make.

For more than 50 years, he has served as the secretary treasurer of the many iterations of the now-called Owensboro and Elsewhere Railroad Club. He is the group’s oldest member.

Eddie James has been involved with railway museums in Kentucky and Illinois. For years, he’s been part of the French Lick Railway, but he’s no longer an active volunteer.

It’s been a dream of his to ride some of Amtrak’s great passenger trains, such as the Empire Builder or Southwest Chief.

“I would have loved to make a trip to the West Coast on the train,” Eddie James said.

The ultimate trip, though, would be on the Orient Express that cuts through Europe, he said.

He enjoys watching trains as much today as ever. Sometimes, he goes to Evansville, Bowling Green, Louisville and a certain spot along a riverbank in Illinois to watch them roll by.

He can’t think of anything better.