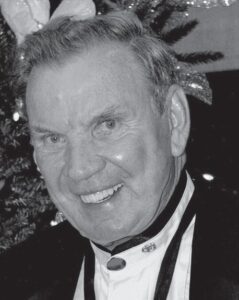 The youngest son of 10 children born to the late Hewey and Leona Ellis Smith, he was born in Bellcraft.

He attended school at Marlowe and then Whitesburg until his junior year and then completed his high school education in Fairborn, Ohio. He earned his bachelor’s degree at the University of Oklahoma.

Mr. Smith enlisted in the U.S. Navy in 1956, where he served in the submarine fleet aboard the USS Amberjack and the USS Robert E. Lee. In 1963, he transferred into the U.S. Air Force to serve in aviation maintenance where he retired as a captain.

He was co-owner of L&S Paint and Decorating in Enterprise, Ala., and was a lifetime member of the Free and Accepted Masons with home lodge in Sundance, Wyo. and Illustrious Sir Past Potentate of the Alcazar Temple in Montgomery, Ala. He spent many years flying patients to the Shriners Hospitals for Children. He was an active member of Mims United Methodist Church.