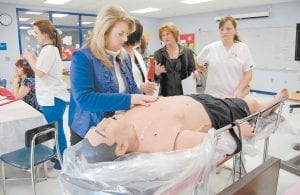 “By having this new piece of equipment, we can expand the program,” said Vivian Back, instructor of the nurse aide and medical assisting programs at the Letcher County Area Technology Center. “He is so real life and he is so interactive. In order to learn you have to put it into practice.”

The $46,000 piece of equipment known as Medi-Man makes breathing sounds, has a heart rate, blood pressure and his pupils dilate.

“He’ll talk to you and say ‘Oh, I am hurt,’” said Back. “Students have to figure out what is wrong with him. He feels like a real person.”

Back and instruction assistant Cathy Campbell will soon spend four days of training in Sarasota, Fla., to learn how to operate Medi-Man, who comes with a computer system.

“I’m very excited to get this and the students are excited,” said Back.

The human simulator is one of several items the technology center purchased with a grant obtained through a federal Perkins Loan, named in honor of late U.S. Rep. Carl D. Perkins, a Democrat from Hindman who represented Letcher and other counties that made up Kentucky’s old 7th Congressional District from 1949 until his death in 1984. Perkins was known for his support of education improvements in impoverished areas.

“I probably have one of the most high-tech labs in the state,” said Back.

The lab includes 30 iPads, eight arms on which the students can start intravenous therapy and draw blood as well as three blood pressure simulators.