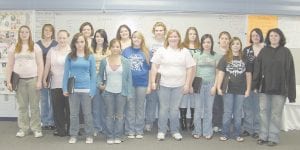 A diverse group of 21 choral students from Letcher County Central High School are ready to take what they’ve learned inside a classroom out on the road.

On Saturday, the LCCHS Choral Ensemble will be one of four groups performing in Somerset at the “Choral Music from the Mountains” program hosted by The Center for Rural Development. Nine members of the ensemble have been chosen to perform at a festival at Morehead State University on November 12.

Saturday’s performance will be the first time the 21 students have performed in public as a group, said Jessica Sparks, choral director at LCCHS.

The Choral Ensemble is mix of students whose other interests range from playing sports to being on the academic team to drama. Some members hold student government positions, while others work on the school newspaper or broadcast programs on the local school channel.

“Music brings people together of all ethnicities, backgrounds, status in society,” said Sparks. “We’re all in here for a reason – to make gorgeous music and learn the prestigious art of singing and reap the benefits of a music education.” 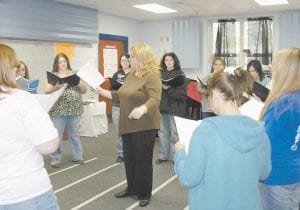 Olivia Trouxel, a freshman, said choral students have gotten to know each other well since the beginning of the semester.

“It’s good to come in here and be able to be who you are because we are family in here,” said Trouxel. “You can’t hate somebody that loves the same thing you love.”

The students also differ in the type of music they like to listen to when they’re not in the classroom performing together.

“I listen to bluegrass, everything from classic rock to metal,” said sophomore Cortney Robertson.

“My dad plays classical music a lot,” said Trouxel. “You get into it after a while. Its mellow.”

When the students come together as a choir, they sing intense songs that tell stories. At Somerset they will sing “Barb’ry Ellen,” “Fair and Tender Maidens,” “Shenandoah,” and “Wild Mountain Thyme.”

Choral music is about using the voice as an instrument, said Sparks.

“Choir is about the technique and joy of singing,” she said. “It is about being emotionally expressive. It is about making beautiful music, not just coming into a class and singing songs.”

Sparks said that learning to sing in a choral ensemble also helps students to achieve in other areas.

“Most people do not understand that students are actually being taught diction, language, pronunciation, vocabulary, math skills, historical events and information in a choir class,” she said.

Sparks said research studies show that students who are involved in a growing or an established music program do better in certain courses and on standardized tests.

“Studying music causes a student to learn how to think critically, how to self-evaluate, and how to be constructive at criticism,” she said. “It helps students to achieve in other courses in high school.

The ensemble has grown dramatically since last year, when only seven students participated. Others enrolled after hearing the group perform last school year.

“I came because I heard the choir last year and really liked it,” said junior Auri Bolen. “Also, when I was little my dad used to sing to me.”

Tasha Howard, a senior, has been in the choir for three years. She said having more people participate this year has made a big difference in the choir’s performances.

“The biggest thing that has changed is with the amount of people. With more people, you can do so much more,” Howard said.

The choir also has another new element this school year – a male voice.

“(Jason Boggs) has added a new dimension to our choir,” said Sparks. “However, without more boys we cannot sing the awesome selection of music out for choirs that require male voices.”

“It’s a big deal because the top students in the state audition for this,” Sparks said. “If we have anybody to make it, it will be a first for LCCHS.”

“To be one of four choirs is a big deal,” said Robertson.

Sparks said the four songs the LCCHS students will be singing at Somerset are difficult for any ensemble to master.

“You can put any piece of music in front of us and we can learn it,” said Ciarra Brock.

The choir has performed at three occasions this year – the opening LCCHS football game, the Labor Day Bash at Whitesburg, and at the funeral for Martha Jane Potter Hall.

Choral music is a growing tradition in southern and eastern Kentucky, said Pat Bradley, a native of Letcher County and associate vice president of arts, culture and entertainment at The Center for Rural Development.

“The Center for Rural Development is proud to promote and encourage these young musicians and we invite everyone to come and share in this exciting event,” Bradley said.

“Choral Music from the Mountains” is the second of The Center for Rural Development’s Arts and Culture Outreach Performances. The first outreach performance, “Carrying on the Tradition: Youth in Bluegrass & Traditional Music,” was held in September 2006.

“This event brought together traditional music groups from throughout Southern and Eastern Kentucky (including Cowan Creek Mountain Music School students and faculty from Letcher County) to perform at The Center,” said Amanda Fickey-Fields, Art and Culture Outreach Coordinator at the The Center. “This event provided the opportunity for students and young adults performing traditional music, to learn, share and network. ‘Choral Music from the Mountains’ hopes to accomplish these same goals. Participation in this event will provide members of four choral groups from the southern and eastern Kentucky region the opportunity to perform to a new audience in a theater with professional sound and lighting.”

“The group will be performing a fantastic selection of traditional folk songs known throughout Appalachia,” added Fickey- Fields. “While many choral groups choose to perform arrangements of more current pop music, the Letcher County Central High School Choral Ensemble will be performing these more traditional pieces, some of which will be a cappella (no music accompaniment).”