Show on Disney is latest big cable project for summer 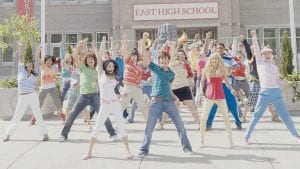 Millions of youngsters will tune in to the Disney Channel Friday for the premiere of ‘High School Musical 2.’ (AP photo)

Anyone who considers mid- August a dead time for anything original on television definitely doesn’t have an elementaryschool aged girl at home.

This week’s Disney Channel premiere of “High School Musical 2” is a Friday-night date for millions of youngsters, and the latest example of how cable has stolen the buzz from its broadcast big brothers this summer.

There’s been a run of attention getting series with big stars on cable, like Holly Hunter in TNT’s “Saving Grace,” Glenn Close in “Damages” on FX and Debra Messing in “The Starter Wife” on USA.

TNT’s “The Closer” routinely beats most of what the broadcasters offer on Monday nights. “Army Wives” became Lifetime’s most popular series ever and “Ice Road Truckers” did the same for The History Channel. “Mad Men” on AMC, “Burn Notice” on USA and “House of Payne” on TNT were other intriguing new offerings.

Add in returning favorites like “Monk,” and there are nearly 30 scripted cable series offering original episodes from June to September, according to Multichannel News.

“It’s a summer to remember,” said Tim Brooks, a television historian and Lifetime executive. “It’s kind of a game-changer in a way.”

The original “High School Musical” premiered to 7.8 million viewers in January 2006. August felt right for the sequel because it is set in the summertime, said Scott Garner, Disney Channel’s senior vice president for programming. By the 17th, summer camp is generally over and school hasn’t started yet.

The new movie features the original cast working and having fun at a country club, with the relationships of its main characters sorely tested. Plenty of new songs are lined up for the youthful audience to sing along to.

“If I was a betting man, I would say it would probably be a (ratings) milestone in cable television this year,” Garner said.

Cable networks see an opportunity to snap up bored viewers while ABC, CBS, NBC and Fox essentially shift to autopilot in the summer. This year the trend has gone into overdrive, and it’s having an impact. Through midsummer, young viewership was down 14 percent from last year on broadcast schedules clogged with repeats, talent and reality programs. Cable was up slightly, Nielsen Media Research said.

The assumption that so many TV sets are turned off during the summer is becoming obsolete, said Jack Wakshlag, chief researcher at Turner Networks. In 1975, with fewer networks to choose from and fewer homes with air conditioners, summer viewership was 15 percent lower than the rest of the year, he said.

In 2005, that difference was only 3 percent – and it’s moving toward a day when there will be just as much TV-watching in July as January, he said.

Another factor in the summertime bounty of choice is the recognition by cable networks that their success increasingly depends upon having signature series that viewers will seek out. That’s why AMC, normally a movie channel, developed “Mad Men.”

The competition is keen. In 2000, the average home in the United States had access to 61 channels, Nielsen said. By last year, the typical home got 104 channels.

Until the “who shot J.R.?” phenomenon 27 years ago, broadcast networks more often than not drew little attention to the end of the season in May. Brooks said the strategy of seeking a ratings boost through season ending special events and series cliffhangers may be counterproductive.

“It may bring you back in the fall to see what happens but it also tells you very explicitly that there’s nothing going to happen until the fall,” he said. “Viewers are taking that as a signal to go elsewhere.”

Broadcasters are hardly blind to what’s going on.

They pay so much for scripted programming that economic reality locks them in to repeating episodes to get extra ad revenue. Ratings that may make a series a profitable hit on cable represent failure on the bigger stage of a broadcast network. Unless someone figures out something different, networks are locked in to concentrating on cheap reality programming in the summer, hoping to catch lightning with an unexpected hit.

“We all tried a little bit,” said Alan Wurtzel, NBC’s chief researcher. “But there is no way you can have a full-fledged, 52- week season, both financially and creatively.”

The result is ABC, CBS, NBC and Fox sitting back for another few months as the cable competitors continue to chip away at what has always made them special. That’s another few months of viewers not checking those networks first when they settle into their couches.