‘High School Musical 3’ in the works 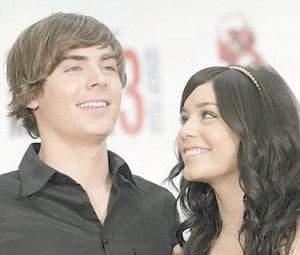 Zac Efron and Vanessa Hudgens posed for pictures after a news conference for the new movie “High School Musical 3” at East High School in Salt Lake City. Filming for the Disney production is now under way. (AP Photo/Douglas C. Pizac)

In real life, Zac Efron is just as cute – maybe cuter – than he is dancing and singing as Troy Bolton in Disney’s wildly popular “High School Musical” movies.

That’s the assessment from 10-year-old Eden Withers, who got a close look at Efron during a news conference at East High School to mark the filming of “High School Musical 3: Senior Year.”

Her seat among a bunch of reporters came courtesy of her dad, who runs the Salt Lake City School District.

“I just really, really like the show and I think Zac is cute,” Eden said with a blushing giggle and grin.

“HSM3” began filming here on May 3 and opens in movie theaters Oct. 24.

Will it be basketball or the theater? Will Troy and Gabriella stay a couple or split to attend different colleges?

Cast members claim they’re not feeling pressure to top the success of the two previous films.

The franchise debuted in 2006 as a Disney Channel original movie and quickly became an international hit seen by more than 250 million viewers in 100 countries and 20 languages.

The sequel’s August 2007 premiere was seen by 18.6 million viewers, becoming the top basic cable telecast of all time. Disney says the DVD release topped all sales records for 2007 and the movie’s soundtrack went triple platinum.

“I kind of think of it as the third act,” said Efron, whose turn as Troy opened the door to roles in other films. “This is the third movie. We’re not looking to top anything, just to do it justice.”

The only pressure, said Hudgens, is making the movie for the big screen, not TV.